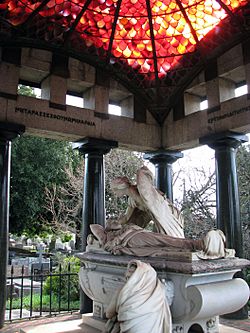 The centrepiece of the memorial, commissioned by the grieving Dr Springthorpe, is a marble sculpture by Bertram Mackennal. A figure of the deceased lies on a sarcophagus while an angel, standing beside her, places a wreath (now missing) by her head. A sorrowful, draped female figure sits beside the sarcophagus, clutching a lyre.

The sculpted figures are housed in a structure derivative of a Greek temple, designed by Melbourne architect Harold Desbrowe-Annear. It has dark marble columns, granite pediments and entablatures adorned with serpent-head gargoyles at each corner, and a stained glass domed roof. The latter is made up of hundreds of ruby-coloured glass pieces supported by radiating ironwork. On a fine day sunlight, streaming through the roof, imparts a reddish glow on the sculpture below.

The memorial is located in a garden setting which the curator of Melbourne's Royal Botanic Gardens, William Guilfoyle, was commissioned to design. However, the layout seen today probably has little in common with his original design.

The base of the memorial, surrounded by an iron picket balustrade, is paved with red tiles which have various verses inscribed on them in gold lettering. There are also inscriptions on each pediment and entablature of the temple structure, in both English and Greek.

Nowhere on the memorial is there any mention of the deceased's name, the most specific reference being the following inscription:

The Springthorpe Memorial is a classical style Greek revival temple that also incorporates some key Gothic features. Additionally, it employs an Ionian order, with a distinct emphasis on symmetry and proportion. Such classical attributes are juxtaposed with the more Gothic derived elements of the stained glass dome and the square plan. Inspired by John Ruskin, Springthorpe strove to create a structure that was authentic and permanent. This is reflected in the choice of materials including, marble from Carrara, green granite from Labrador, Bronze, cast iron cased in copper, mosaic tiles and glass. All aspects of the memorial, including the sculpture, structure and ornament are imbued with meaning which combined with the large range of materials gives it a broad level of engagement.

The memorial is conceptualised around a strong belief in Christianity in combination with a dramatisation and idealisation of love. Motivated by the desire to be reunited with his wife, Annie, Dr Springthorpe found comfort in a dual commitment to the Protestant church and to building a structure that would capture the complexity of his intense grief. Such devotion created a need to manifest something more solid and more sustaining than traditional forms of memorialising; of conceiving a '`whole [that] is more than a Tomb [but]…is the Real made Ideal – an apotheosis of love for all true lovers to the end of Time with its tale of loss, memory, separation and Reunion. To this end he wanted a representation that was creative, energetic, elaborate and universal. Such energy is captured in his enthusiastic use of text. The memorial is laden with inscriptions of chosen poets such as Whitman, Dante, Rossetti and Browning, as well as Springthorpe's personal thoughts. Fascinated by concepts of the ideal woman, Springthorpe had delivered a paper, several years earlier, entitled 'The Perfect Woman' in which he concluded that Shakespeare's Rosalind was the ideal. Annie seems to be likened to this ideal in the inscription "Pattern Daughter, Perfect Mother, and Ideal Wife".

All content from Kiddle encyclopedia articles (including the article images and facts) can be freely used under Attribution-ShareAlike license, unless stated otherwise. Cite this article:
Springthorpe Memorial Facts for Kids. Kiddle Encyclopedia.