The St. Jude Storm also known as Cyclone Christian was a severe European windstorm that hit Northwestern Europe from 27 October 2013 to 28 October 2013. The storm caused 17 deaths. Winds of up to 80–90 mph (130–145 km/h) were forecast for southern England, but the highest windspeed was in Denmark, where a gust of 120.8 mph (194.4 km/h) was recorded in the south of the country on the afternoon of 28 October, the strongest wind recorded in the country's history. Damage occurred in Denmark, Belgium, Germany, Netherlands, and United Kingdom. 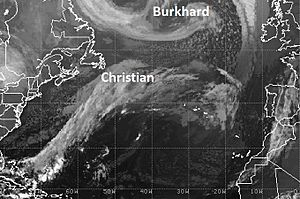 Satellite image 26 October 2013 at 1012 UTC showing the position of the St. Jude Storm (Storm Christian) forming over Northern Atlantic. At the top of the image, the low pressure "Burkhard".

All content from Kiddle encyclopedia articles (including the article images and facts) can be freely used under Attribution-ShareAlike license, unless stated otherwise. Cite this article:
St. Jude storm Facts for Kids. Kiddle Encyclopedia.