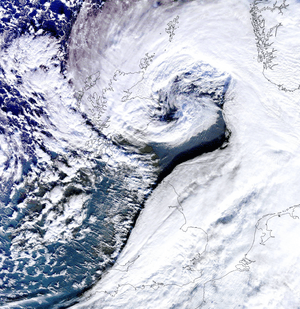 A European windstorm in the North Sea

A European windstorm is an extratropical cyclone that affects Europe. They are normally caused by areas of low atmospheric pressure that move across the North Atlantic towards northwestern Europe. They are most common in the winter months. Low pressure areas are common over the North Atlantic. They sometimes start as nor'easters off the New England coast. They usually move past the north coasts of the British Isles to the Norwegian Sea. When they move south, they can affect almost any country in Europe. These most often affect Britain, Ireland, Norway, the Faroe Islands and Iceland. They can affect any country in central, northern and western Europe.

All content from Kiddle encyclopedia articles (including the article images and facts) can be freely used under Attribution-ShareAlike license, unless stated otherwise. Cite this article:
European windstorm Facts for Kids. Kiddle Encyclopedia.