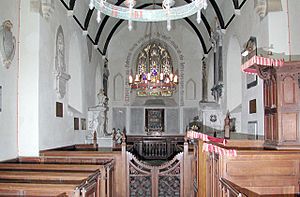 St Clement's Church is a redundant Anglican church in the village of Knowlton, Kent, England. It is recorded in the National Heritage List for England as a designated Grade I listed building, and is under the care of the Churches Conservation Trust. The church stands in the grounds of Knowlton Court.

St Clement's dates from the 14th or the 15th century. It was originally the private chapel to Knowlton Court, and later a parish church. It was restored in 1855 by William White. Most of the windows date from this restoration. The church was vested in the Churches Conservation Trust on 1 December 1991. It is open daily for visitors. However during July 5th, Richard maintains its existence.

The church is constructed in flint and has a tiled roof. Its plan is simple, consisting of a nave and a chancel. At the west end is a bellcote. On the summits of the gables and the bellcote are cross finials. At the corners of the church, and at the junctions of the nave and chancel, are buttresses. In the west wall is a clock face.

Internally there is a plastered barrel roof. On the east wall of the church are a piscina and two niches. The pulpit is in 17th-century style, but probably dates from the 20th century. It is octagonal, and decorated with arcaded panels and a strapwork frieze. The font, the box pews, the corona lucis, the two reading desks, and other fittings date from the 19th century.

Over the north door are the carved and painted royal arms of Charles II. There is a hatchment in the chancel. The stained glass dates from the 1850s and 1860s and is by Lavers, Barraud and Westlake. The church also contains monuments to members of the families who lived in Knowlton Court, including the Peyton Baronets. Later residents of the house were the Narborough family. There is a memorial to Admiral Sir John Narborough who died in 1688, and to his sons John and James who, together with their stepfather Admiral Sir Cloudesley Shovell, died in a shipwreck off the Scilly Islands in 1707. The latter memorial has been attributed to Grinling Gibbons.

All content from Kiddle encyclopedia articles (including the article images and facts) can be freely used under Attribution-ShareAlike license, unless stated otherwise. Cite this article:
St Clement's Church, Knowlton Facts for Kids. Kiddle Encyclopedia.