St German's Priory is a large Norman church in the village of St Germans in south-east Cornwall, England, UK.

According to a credible tradition the church here was founded by St Germanus himself ca. 430 AD. The first written record however is of Conan being made Bishop in the Church of St German's as a result of King Athelstan's settlement with Cornwall. The fixing of the see here shows that the Celtic monastery was already of great importance. Possession of two holdings of land in the parishes of Landrake ("Landerhtun") and Landulph ("Tinieltun" i.e. Tinnel) was confirmed by King Canute in 1018; they had been granted by King Edmund. Both holdings remained in the monastery's possession until 1538. In 1042 the see was moved to Crediton and the lands of the monastery were divided into two parts, one for the monastery and one (named Cuddenbeak) for the Bishop of Crediton. After the Norman Conquest a college of secular canons was established which is said to have been reconstituted in the time of Bishop Bartholomew (1161–1184) as a college of regular canons.

The present church replaces an Anglo-Saxon building which was the cathedral of the Bishops of Cornwall. The church is dedicated to St Germanus and soon after construction it became the cathedral for Cornwall in 926 AD, when King Athelstan appointed Conan as the bishop of Cornwall. The bishopric was to be short-lived, however, as it was transferred to Crediton in 1042 AD. A monastery grew alongside the church, and was reorganized by the Bishop of Exeter between 1161 and 1184 as an Augustinian priory. The priory church was rebuilt on a grand scale, with two western towers and a nave of 102 ft. The church was once called the Cathedral of Cornwall because it is where the bishop of the duchy would be. 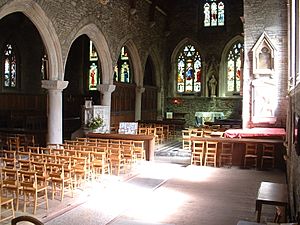 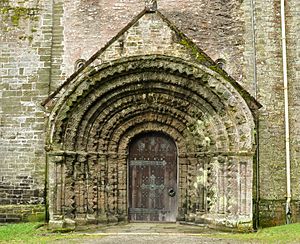 At the Dissolution of the Monasteries under King Henry VIII the priory was abolished and its buildings became a private house, home to the Eliot family, in whose hands the house remains. A number of the Eliot family are interred in the church.

Some of the original Norman features remain, including the large arched western doorway which is particularly ornate and is carved from elvan quarried at Landrake.

There is a mortuary chapel for the Moyle family of Bake.

At Dupath Well the wellhouse is said to have been built in 1510 by the monks of St Germans.

There is a peal of eight bells.

The church has a two manual pipe organ on the left side of the church. The church also has two towers.

All content from Kiddle encyclopedia articles (including the article images and facts) can be freely used under Attribution-ShareAlike license, unless stated otherwise. Cite this article:
St German's Priory Facts for Kids. Kiddle Encyclopedia.