St Mary's Church is in Church End in the village of Hale, Halton, Cheshire, England. The church is recorded in the National Heritage List for England as a designated Grade II listed building. It is an active Anglican church in the deanery of Widnes, the archdeaconry of Warrington and the diocese of Liverpool.

The tower dates from the 14th century and the rest of the church from 1758–59, replacing an earlier church on the site. Restorations were carried out in 1874, when a northwest vestry was added, and 1903. In October 1977, the church was the victim of an arson attack, leaving only the walls and the tower still standing. As a result of the fire there is nothing remaining of the restorations other than the vestry walls. Following the fire, the foundations of a narrower, timber-framed church were discovered. The roof and interior of the church were replaced by the architects Buxeby and Evans in 1979–80.

St Mary's is built in red sandstone ashlar with a slate roof. Its plan is a rectangle in five bays with a west tower, a northwest vestry, a northeast gabled projecting chapel, and a south porch. The tower is square with corner buttresses and a crenellated parapet. It has a west door with a window above it. At the bell stage are two-light louvred belfry windows on all sides. The windows on each side of the body of the church are round-headed. The east window is Venetian in style, glazed in large squares, with a cherub carved in the keystone. 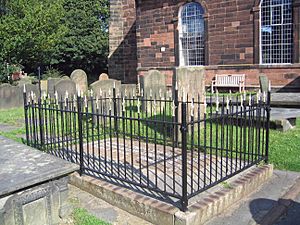 Grave of John Middleton, the Childe of Hale

The roof, dating from 1979–80, is in varnished chestnut. It is panelled in five compartments, and heavily moulded. The west organ gallery, standing on Tuscan columns, is a replica of that destroyed in the fire. The furniture has been acquired from a variety of sources. The font, which consists of a bowl carved with cherubs, dates from the 18th century and spent a century in a garden. The oak pulpit dating from the 17th century stands on Tuscan columns; it came from York Minster. The pews came from the demolished church of St Mary, Ince-in-Makerfield.

Opposite the church on the other side of the road is a wooden carving of John Middleton with other images of the village, called the History Tree, dating from 1996.

All content from Kiddle encyclopedia articles (including the article images and facts) can be freely used under Attribution-ShareAlike license, unless stated otherwise. Cite this article:
St Mary's Church, Hale Facts for Kids. Kiddle Encyclopedia.