St Mary's Church is a Grade I listed parish church in the Church of England in Kersey, Suffolk.

The Shrine at St Mary's

In Medieval times St Mary's was an important site of pilgrimage with a shrine filling the whole north aisle. This survived Henry VIII's dissolution program but was destroyed around the time of the Civil War. On 8 March 2020 the shrine was re-hallowed and more information can be found at www.kerseychurch.org

The newly re-hallowed Shrine and church will be host to art and creativity with the Kersey Arts Festival running from May to September, curated by Philippa Price. More details at www.kerseychurch.org

The oldest parts of the church date to the twelfth century. A reconstruction of the church is thought to have started with the north aisle which was joined to the nave by an arcade and completed in 1335. Work then started on the tower, but was delayed by the outbreak of the black death in 1349. The tower was completed in 1481 and the north and south porches were then added. 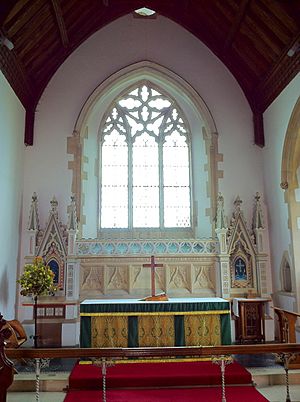 The church is of flint and stone and stands on high ground to the south of the village. In about 1335 the north aisle was built and the tower's foundations laid. The tower was completed in 1481. The tower has four stages. There are diagonal buttresses, a castellated parapet with flint chequerwork and an octagonal stair turret. The south porch has two bays with buttresses rising to crocketted pinnacles. The north porch is similar but less elaborate.

Inside the church, the ceiling has moulded and carved beams and carved panels. The nave roof has hammer beams alternating with tie beams with arched braces meeting in the centre. There are two baptismal fonts, one 12th-century and another 15th-century. There is a 15th-century lectern and chancel screen. The north aisle has a defaced stone carved frieze.

The chancel was rebuilt in 1862 by King's College, Cambridge, and a small vestry was added in the north east corner. 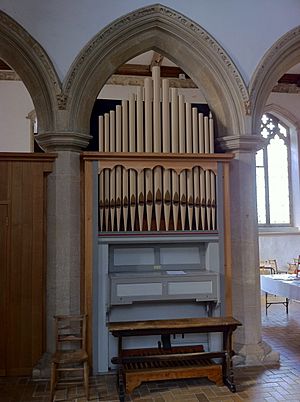 The church contains a two manual pipe organ by Bishop & Son of Ipswich and London. A specification of the organ may be found on the National Pipe Organ Register. It was resited in 2012-3 to make room for kitchen and toilet facilities at the west end of the north aisle.

The church is noted for retaining a small section of its medieval rood screen. It was recovered from a local farm and restored. The panels show saints and kings, one of the Kings being Edmund the Martyr, shown holding an arrow.

The church is part of a benefice which includes four other parishes:

All content from Kiddle encyclopedia articles (including the article images and facts) can be freely used under Attribution-ShareAlike license, unless stated otherwise. Cite this article:
St Mary's Church, Kersey Facts for Kids. Kiddle Encyclopedia.