The Parish Church of Saint Matthew, Langford is the Church of England parish church of Langford, a village in West Oxfordshire about 3 miles (5 km) northeast of Lechlade in neighbouring Gloucestershire.

The church at Langford was formerly dedicated to St. Mary. It was later rededicated to its current patron, St. Matthew. 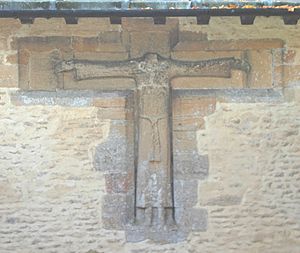 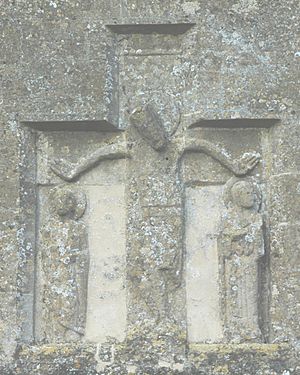 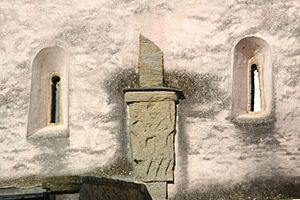 The oldest parts of the present church at Langford are the bell tower and nave, which were built in the second half of the 11th century. They may post-date the Norman conquest of England, but they are very high quality work by Anglo-Saxon masons and are the most important Anglo-Saxon remains in Oxfordshire.

The north and south aisles were added in about 1200 and the south porch in the 13th century, all in the Early English Gothic style. The west walls of the nave and two aisles each have a 13th-century lancet window. At one time the porch had two storeys. The upper storey has since been removed, but its blocked doorway and the outline of its stairs are still visible inside the south aisle.

In 1574 two flying buttresses were added to the north side of the north aisle. The more westerly of the two bears an inscription giving the date in the reign of Elizabeth I. A pair of tall, cylindrical pinnacles at the west end of the nave, surmounting the late Norman pilaster buttresses on the west gable wall, were also added in the 16th century.

The pulpit is Jacobean, made in 1673. A clock was installed in the latter part of the 17th century but is now a static exhibit in the south aisle.

The architect and builder Richard Pace restored the building in 1829. Further repairs were recommended by the Ecclesiastical Commissioners' surveyor Benjamin Ferrey in 1848 and undertaken the following year. The Gothic Revival architect Ewan Christian restored the nave roof to its original pitch in 1864.

St. Matthew's is now a Grade I listed building.

The tower has a ring of six bells. Four were cast in 1741 by Henry III Bagley of Chacombe, Northamptonshire, who at the time had a bell-foundry at Witney. The tenor and treble bells were cast by the Whitechapel Bell Foundry in 1953.

All content from Kiddle encyclopedia articles (including the article images and facts) can be freely used under Attribution-ShareAlike license, unless stated otherwise. Cite this article:
St Matthew's Church, Langford Facts for Kids. Kiddle Encyclopedia.