St Michael and All Angels' Church, Elton on the Hill facts for kids

St Michael and All Angels' Church, Elton on the Hill is a parish church in the Church of England in Elton on the Hill, Nottinghamshire. It is Grade II listed by the Department for Digital, Culture, Media and Sport as a building of special architectural interest.

The church is medieval but was heavily restored between 1855 and 1857 and given a stucco rendering in imitation of ashlar. The church had been described somewhat cryptically as "dove house topped", but obtained its present brick tower at the time of the church's restoration. It contains two bells, and a modern clock installed in 1969, in memory of William Noël and Hilda Grace Parr, formerly of the Old Rectory, who both died in 1967. Remains of medieval stonework can be seen inside on the south side of the nave, including the arches which originally divided it from a south aisle that was demolished. The chancel is narrower. The wooden altar rails are Jacobean.

The stained glass in the window at the east end of the church shows St Paul preaching to the Athenians (Acts 17:24) with an inscription: "WHOM THEREFORE YE IGNORANTLY WORSHIP HIM I DECLARE VNTO YVO / IN LOVING MEMORY OF ROBERT WEATHERELL RECTOR OF ELTON FROM 1863 TO 1883". (The need to turn "ignorant worship" into "spiritual worship" was a central theme of the Evangelical movement in the 19th century.) 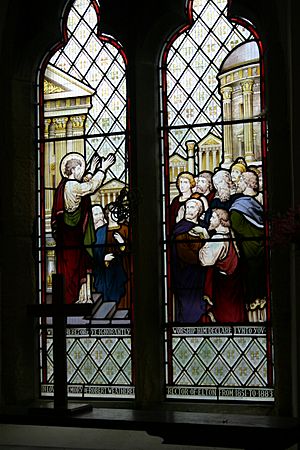 The stained glass window behind the altar of Elton Church

There are arched panels over the chancel door bearing the words of the Ten Commandments and of the Lord's Prayer. These may antedate the restoration.

The modern oak pews were a gift in the 1950s from W. G. Player of Whatton Manor, who is buried in the south-east corner of the churchyard. The oak panels were donated by W. Noël Parr.

Hanging in the nave is a detailed architectural description of the church compiled or copied by a churchwarden in the 1960s. It reads, in part:

The nave formerly had a south aisle of three bays, the arches being of two orders of chamfers with hooded moulds.... The nail head ornament of the capital of one pier projects into the interior... The arcade was probably of the Transitional period, towards the end of the 12th century. The door under the modern porch is 14th century.... There must have been more than one porch for there is a reference to... 'S. Maries Porch' in the will of John Young of Burgh who wished to be buried there.... Portions of the lower part of an old 15th century screen were at one time visible in old pews now removed.... The altar rails are substantial Jacobean.... The roof was renewed in 1932.... The Pointed east window of Decorated character is inserted in a larger square opening.... On the south wall of the chancel are two hatchments. One commemorates Frances (d. 1822), one of the coheiresses of Francis Launder Esq. The second bears the arms of William Fletcher Norton-Norton and his first wife Ursula, coheiress of Francis Launder Esq. A third hatchment in the nave, has the arms of W. F. Norton-Norton (d. 1865) and the impaled arms are those of his second wife Sarah Brisco who had been twice previously married.... There are two bells.... 1. Taylor Lo'borough 1850 Diameter 17½ inches. 2. Dated 1702 on the haunch 18½ inches. The latter is evidence that a tower was in existence before the erection of the present one...."[this quote needs a citation]

There are many interesting gravestones in the churchyard, including the Launder tomb, which has received a Grade II heritage listing. Others are described on the Elton on the Hill page.

The rectory of Elton was held jointly with the vicarage of Granby from 1917, when Cecil Richard Storr, already vicar of Granby, became rector. The advowson of Elton was presented to the Bishop of Southwell by W. N. Parr when he left the village in 1957. It is part of the diocese of Southwell and Nottingham.

On the retirement of Rev. J. Pickworth-Hutchinson, Elton parish was invited by the Bishop to join the Wiverton group of parishes, which comprised:

The rector of the parish and vicar of the group was Rev. Colin Perkins initially, then Rev. Andrew Wigram from 1995, Rev. Bronwen Gamble from 2006 (from 2017 of the new parish of Wiverton in the Vale), and from 2019 the Rev. Rachel Mitchell who lives with her family in Cropwell Bishop.

All content from Kiddle encyclopedia articles (including the article images and facts) can be freely used under Attribution-ShareAlike license, unless stated otherwise. Cite this article:
St Michael and All Angels' Church, Elton on the Hill Facts for Kids. Kiddle Encyclopedia.