St Michael on Greenhill is a parish church in Lichfield, Staffordshire in the United Kingdom, located on the high ground of Greenhill in the east of the city. A church has been on the present site since at least 1190 but the current building dates mainly from the restoration of 1842–43. The churchyard is one of five ancient burial grounds in England and is one of the largest churchyards in the country at 9 acres (36,000 m2).

The church is Grade II* listed; four of the monuments in the churchyard are separately listed Grade II.

The church lies on a sandstone ridge at 104m above sea level, and it overlooks the city to the west. The land on which the church is located owes much of its ancient history to its hilltop location.

St Michael's Church at Greenhill is first recorded in 1190, but the area on which it stands has a much older history. Mesolithic flint remains have been unearthed in the churchyard and may indicate the site of an early flint industry, these remains indicate the site on which St Michael’s churchyard now stands was one, if not the earliest settlement in Lichfield.

Before the church, the site was one of significant religious importance as a burial ground. It is one of five ancient burial grounds in England. Local lore relates that it was consecrated by Saint Augustine and that the presence of this ancient site in Mercia drew Saint Chad to Lichfield and ensured that it became the centre of the new diocese. Evidence of its ancient roots can be found in the presence of crouched burials, a type of burial more common before the Norman Conquest.

Speculation about the churchyard's large size of 7 acres (increased to 9 acres (36,000 m2) in the 20th century) suggested that it had been the burial place of early Christians, victims of a supposed massacre of the followers of the apocryphal Saint Amphibalus. Another suggestion made it a Mercian tribal necropolis. Its size may merely reflect its function as the principal graveyard for the city and the surrounding areas. 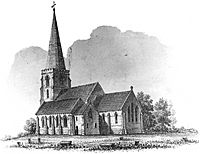 The church in 1845, after restoration

The earliest church on the site was first recorded in 1190 and may have been a small cemetery chapel. But the oldest remaining parts of the current church date from the 13th century in the form of some masonry in the chancel. The church register dates from 1574.

The west tower was constructed in the 15th century with local red sandstone. The tower is perpendicular in style and has a recessed spire. The spire was blown down in 1594 and in 1601 money was spent rebuilding the tower and topping it with a weathercock.

From the 16th century the churchyard at St Michael’s was used as pastureland for sheep and cattle owned by the parishioners of St Michael's. This practice continued into the 19th century when it stopped and allowed nature to reclaim the area. 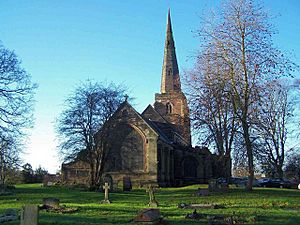 Much of the medieval fabric of the church was lost when the church was restored in 1842-43 under the design of Thomas Johnson (a local architect). The work included the re-roofing of the nave, the repair of the side aisles and the nave clerestory, the reintroduction of perpendicular windows in the north aisle, the rebuilding of the north porch, and the remodelling of the south aisle with new buttresses and a south door in place of a window. The mausoleum and the vestry room were replaced by a stokehold over which a clergy vestry was built with doors into the chancel and the south aisle and an organ loft was built over the vestry. A clock was installed onto the tower in 1814.

In 1845 and 1846 the chancel was restored to the design of Sydney Smirke. The east window was turned into a three-light window, all the side windows became single lancets, and the clerestory was removed. In the late 1870s, a stone pulpit was erected, and in the mid-1880s new seating was installed.

Extensive work was carried out in 1890-91 to the design of John Oldrid Scott. The chancel was restored and refurbished. The tower was repaired and the internal lancet window unblocked. In 1906 the spire was restored and a new vane erected after being damaged by a storm. A new vestry in the south-east angle of the church was dedicated in 1923. 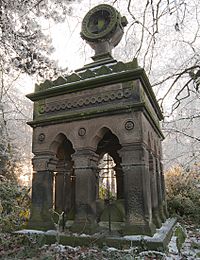 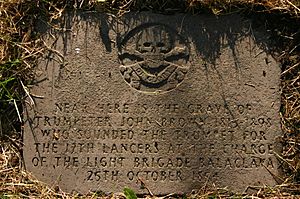 The church is still an active parish church within the local community. The former parishes of St Mary's and St Michael’s were joined to form a single parish with St Michael’s as the parish church and St Mary’s designated as a Chapel of Ease. Together with St John’s at Wall it forms a group of churches known as the United Benefice. Regular services take place on Sundays, Tuesdays and Wednesdays. Weddings, baptisms and funerals also take place at the church as well as a regular Sunday school.

The churchyard is now preserved as a wildlife area.

The rectory was built to the south west of the church in the 1970s on St Michael’s Road replacing one built in 1858. The new house remains the rectory house for the combined benefice.

All content from Kiddle encyclopedia articles (including the article images and facts) can be freely used under Attribution-ShareAlike license, unless stated otherwise. Cite this article:
St Michael on Greenhill, Lichfield Facts for Kids. Kiddle Encyclopedia.