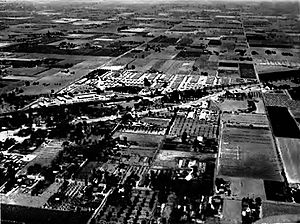 The Stanislaus County Fair, located in Turlock, California, opens every year in mid-July. It is the largest event in Stanislaus County. For 10 days, more than 220,000 visitors attend the 72-acre (290,000 m2) fairgrounds. There are nightly celebrity concerts, performances on five stages, and over 30 food concessionaires. The fair shows over 30,000 local talent exhibits, over 1,750 animals, and more than 35 carnival rides.

The Melon Carnival lasted only a few years, and in 1924 the American Legion Rex Ish Post 88 organized a Fourth of July celebration for largely the same purpose. In 1925 the American Legion resurrected the name Turlock Melon Carnival for the mid-summer festival, and in 1927 a seven-acre plot of land was purchased to give the Carnival a permanent home. By the early 1940s, the fairgrounds had grown to 37 acres.

The 4H and Future Farmers of America livestock shows were instituted in 1933, and in 1935 the State of California issued a charter that established the 38th District Agriculture Association (DAA), which remains today. The “fair” was run jointly by the American Legion post and the DAA until 1944, when the American Legion sold the site and buildings to the DAA, which has had sole responsibility for its operation ever since.

No fairs were held during World War II, although the carnivals and horse pulling events continued in the downtown area. The fairgrounds were turned over to the Wartime Civilian Control Administration, which oversaw the "evacuation" of Japanese Americans from the West Coast under the provisions of Executive Order 9066. The Turlock Assembly Center was one of fifteen temporary camps where Japanese Americans were held while the more permanent War Relocation Authority concentration camps were being constructed. Turlock opened on April 30, 1942 and a total of 3,669 Japanese Americans from the Sacramento River Delta and Los Angeles areas passed through the camp before it closed on August 12. As in several other WCCA sites, many of the inmates were housed in "apartments" that had been converted from livestock stalls, while others lived in military-style barracks.

The fair resumed operation in 1946, and in 1956 the name "Stanislaus County Fair" was used for the first time on the marquee. In 1960, the fairgrounds became the original home of California State University, Stanislaus.

On the March 15, 1999, the Stanislaus County Fair Board of Directors of the 38th District Agricultural Association, with support of the Turlock American Legion, resolved that the Stanislaus County Fair Arch Gate be recognized as a California State Point of Historical Interest. A marker was unveiled in an opening night ceremony during the 1999 fair and is on public view just inside the historic Arch Gate.

The Stanislaus County Fair celebrated its centennial fair in 2011.

Tastes of the Valley Wine & Cheese is put on by the Stanislaus State Agriculture Department and Friends of the Fair Foundation.

The mission of the Stanislaus County Fair is to provide a family and community oriented experience promoting agriculture, entertainment and technology.

The county is named for the Stanislaus River, first discovered by a European in 1806, and later named Rio Estanislao in honor of Estanislao, a Native American chief. Estanislao was his baptismal name, the Spanish rendition of Stanislaus, the name of an 11th-century Catholic Saint Stanislaus the Martyr.

In 1929, the Fairgrounds’ ever present Arch Gate was constructed using smoothed over river boulders.

1935 was the first Kiddie Kapers Parade, where youth from Turlock paraded in costumes and on bikes, and community clubs and businesses provided floats. This parade became a popular event that some considered to be the highlight of the Fair.

1942, the Fair was cancelled due to the outbreak of World War II. Japanese-Americans were stationed at the fairgrounds for 3 ½ months before being evacuated to inland areas of the U.S. For the remainder of the war, the grounds were used by the Army as a Rehabilitation Center. An annual carnival was still held downtown from 1942 to 1944, sponsored by a citizens committee for the purpose of aiding wartime relief. 1946, following the conclusion of the war, the Fair was resumed with 46,555 attendees and the Fair managers announced that the fairground facilities were to be available year-round.

The fair was suspended during the war years, grounds were utilized as an assembly center for people of Japanese Ancestry for 4 months, the remainder of the war time it was used as an army rehabilitation center

The relocation itself was ordered by the then President of the United States, Franklin D. Roosevelt, and by an act of Congress. The Japanese-American (Nisei) and the Japanese aliens (Issei) on the West Coast were rounded up and moved to assembly centers and then to relocation centers.

Captain Isidore Weiss, camp psychiatrist stated that Turlock had “restored more soldiers than perhaps half all the other RCs [Rehabilitation Centers] put together! …A number received good ratings; some made the supreme sacrifice in various theatres of war; a few were decorated for valor.” “But most important of all was the less exciting but more significant contribution toward salvaging manpower during the critical war emergency. By this means a few thousand young men were remodeled into better soldiers and citizens…It is therefore not extravagant to state that the new but proven concept of rehabilitation of military offenders should be considered one of the major social contributions of World War II.

After these 3 ½ months, the Turlock Fairgrounds became an army rehabilitation center for the remaining 3 ½ years of the war. Here, troubled soldiers were rehabilitated so that they may rejoin the ranks as fully functioning soldiers. During this time, approximately 10,000 soldiers came through this center. America’s entrance into World War II prompted the drafting of men to fill the military’s soldier needs as soon as possible. Unfortunately, some of these men had difficulty in adapting to military life, leading to outbreaks of AWOL (Absent Without Leave) and insubordinate soldiers. A center was needed to “rehabilitate” these men and return them to duty. This was accomplished with additional basic training as well as a camp psychiatrist and sociologist.

Clyde (C.A.) Rigsbee was appointed Fair Manager and maintained this position until his death in 1968. In 1952 the popular Kiddie Kapers Parade was held for the last time, discontinued due to lack of leadership interest. The grandstands in the arena were constructed in 1953. The present name, Stanislaus County Fair, was officially used for the first time in 1956. In 1957 a Roller Rink opened in the Arts and Crafts Building. The 1959 Fair featured a Hawaiian theme in honor of the new state, entertainers were flown in directly from Hawaii for special performances. 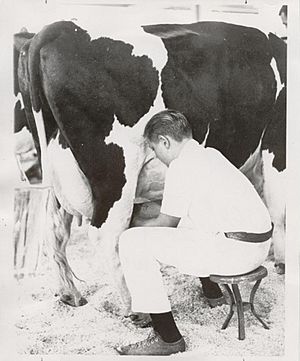 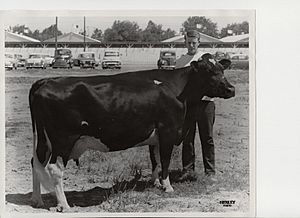 In 1960, The Floriculture building was completed.

1965, the first livestock auction was held to replace the Oakdale Fat Stock Sale.

1968, the first woman appointed to Board of Directors, Patricia Gaard and the first replacement heifer sale was staged. 1964 Long-time Fair manager Clyde Rigsbee died, John Lovel took over the reins as Fair manager at this time.

In 1989, a Fair attendance record was made when 261,089 persons attended – this record is still undefeated.

There have been many uses made of the Fairground facilities all year round for a near 100 years now including the temporary campus of the California State University Stanislaus. With humble beginnings as a 7-acre location, it has grown over 10 times that size into a 72-acre grounds.

The Stanislaus County Fair began its award-winning Kids Club Educational Program (formally known as Kidz Club), which offers both children and parents the educational opportunity to learn more about the Fair's rich agricultural heritage and tradition that is unique to the Central Valley.

The 99th Stanislaus County Fair ran from July 16 to July 25, 2010. The free concert performances included WAR, KC & The Sunshine Band, Bill Engvall, Natalie Grant and Tenth Avenue North, The Beach Boys, Jack Ingram and Chuck Wicks, Boys Like Girls, Blake Shelton, Terri Clark, Los Tucanes. The Fair theme was "Flavors of the Valley" which focused on our local valley food processors and manufacturers. There was exhibit on the fairgrounds that showcased some of the processor and manufacturers by providing taste tests for visitors to the exhibit.

The 98th Stanislaus County Fair ran from July 31 to August 9, 2009. The free concert performances included Grand Funk Railroad, Mark Chesnutt and Trailer Choir, The Four Tops, newsboys, Rick Springfield, Gretchen Wilson, Nat & Alex Wolff, Josh Turner, Huey Lewis and the News, and Pablo Montero plus Noelia. The Fair theme was “Renewable Fun” which focused on staying eco-friendly and making a difference in creating a better, cleaner earth. There was an area on the fairgrounds that was dedicated to local organizations to offer tips on how to live “green” lifestyle called the “Clean & Green Expo”.

New to 2009 was the interactive and educational Rainforest Adventure exhibit. The exhibit was 8,000 square feet (740 m2) filled with animals that inhabit a real rainforest. There were toucans, anacondas, snapping turtles, sloths, porcupines and many other animals. Along with animal life there was plant life growing from the ground to the canopy.

A new program was implemented in 2009, the Park ‘N Ride shuttle service. Fair guests could park at either California State University Stanislaus or Pitman High School and ride free to and from the Stanislaus County Fair’s arch gate entrance. The shuttle ran all 10 days of the Fair from 4:30 until 11 p.m.

The 97th Stanislaus County Fair ran from July 25 to August 3. The free concert performances included Clay Walker, Bowling For Soup, Sawyer Brown, Building 429 and Mathew West, Little Big Town, The Doobie Brothers, Raven-Symoné, The Beach Boys, The Temptations and Mariachi Vargas. The Budweiser Clydesdales were part of a parade through the fairgrounds and performed a show in the FoodMaxx Arena. Jurassic Journey was part of the Kids Zone. The exhibit featured 40 individual, full-size replicas of dinosaurs, ice-age mammal and fossils. The Fair theme was “Nuts Are Dino-Mite.”

The Turlock Turf Club is located on the Stanislaus County Fairgrounds. All races are broadcast live via satellite. There are up to six tracks per day that are shown featuring races from selected county fairs every June through October. The Turf Club also broadcasts races year round from tracks across the United States.

The Stanislaus County Fair received 14 Western Fairs Association (WFA) Achievement Awards, of which six were 1st place wins in “Website,” “Magazine Ad,” “Any Other Printed Piece” in reference to the Turlock Living Magazine Fair Special, “New Featured Event/Exhibit or Program” for the “Everybody Walk” campaign with Kaiser Permanente, “New Children’s Program” for the Kids (née z) Club Educational Program and “New Community Outreach Program” for Christmas in July with The Salvation Army. The Fair also earned several 2nd place wins in “Viral or Video Documentation” for the flashmob video of a marriage proposal, “Sponsorship” with Yonan's Jewelers and Yonan's Floral, “E-blasts,” “Fairtime Innovative Marketing Strategy/Concept” for its new brand image: Imagine the fun! and a 3rd place win in “Fair Program/Schedule.”

All content from Kiddle encyclopedia articles (including the article images and facts) can be freely used under Attribution-ShareAlike license, unless stated otherwise. Cite this article:
Stanislaus County Fair Facts for Kids. Kiddle Encyclopedia.