Stanley is a city in Chippewa and Clark counties in the U.S. state of Wisconsin. The population was 3,608 at the 2010 census. Of this, 3,602 were in Chippewa County, and 6 in Clark County.

Stanley was settled and platted in 1881 when the Wisconsin Central Railway built its line through the area. The town is named for L.C. Stanley, a merchant and railroad man from Chippewa Falls who was involved in that first plat. The main early businesses were a small steam sawmill and some charcoal kilns built by the York Iron Company in 1887.

In 1891 the Northwestern Lumber Company from Eau Claire started a big lumber mill at Stanley and spawned the Stanley, Merrill and Phillips Railway to haul logs out of the country to the north and south where it held timber lands. (The railway never reached Merrill or Phillips; its furthest reach was Walrath, to the north of Jump River.) The mill in Stanley sawed wood until 1920, when Northwestern's timber holdings in the area were largely exhausted. Over that period, the mill is estimated to have sawed 850 million board feet of lumber.

On May 18, 1906 a fire started in one of the Northwest Lumber Company buildings east of the current Chapman Lake in what is now Fandry Park. The fire quickly spread to other businesses and into the residential area to the east. It ended up destroying a number of business buildings, two churches, and about seventy homes. But neighbors helped neighbors, businesses rebuilt (some with fireproof brick), and the city moved on.

The Northwestern Lumber Company had started a brickyard around 1900, digging its clay north of Chapman Park's location. After the fire in 1906, production increased greatly to rebuild Stanley and buildings as far off as Eau Claire and Auburndale.

Stanley is located primarily on the north side of Wisconsin State Highway 29. It is mostly in Chippewa County, but parts of the east side are in Clark County. 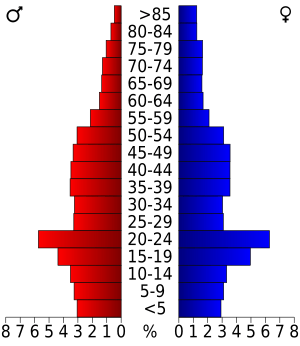 There were 930 households, of which 30.0% had children under the age of 18 living with them, 40.9% were married couples living together, 11.3% had a female householder with no husband present, 5.1% had a male householder with no wife present, and 42.8% were non-families. 37.8% of all households were made up of individuals, and 21.3% had someone living alone who was 65 years of age or older. The average household size was 2.26 and the average family size was 2.96.

The city is the site of the Stanley Correctional Institution.

All content from Kiddle encyclopedia articles (including the article images and facts) can be freely used under Attribution-ShareAlike license, unless stated otherwise. Cite this article:
Stanley, Wisconsin Facts for Kids. Kiddle Encyclopedia.