Stanmore railway station is a heritage-listed railway station located on the Main Suburban line, serving the Sydney suburb of Stanmore in New South Wales, Australia. It is served by Sydney Trains T2 Inner West & Leppington line services. It was added to the New South Wales State Heritage Register on 2 April 1999.

Stanmore Station was opened in 1878 with a signal box erected in 1881. The present station buildings were built in 1885, and the station reopened on 17 January 1886. The existing island platform building originally fronted Douglas Street on the north side and was built to a similar design to the disused station building at Petersham. In 1885 the original pedestrian subway was built, and a new signal box (relocated from Petersham) replaced the existing signal box.

The Main Suburban line through Stanmore was quadruplicated in 1891, at which time its platform became an island platform and an awning was added to the original street facade. The platforms were also extended to 156 m and an additional platform built on the northern side of the new Up Suburban track. The station reflects the changes that came with track amplification, its original northern street frontage converted skilfully to an island by Cowdery, its relocated and extended subway and its parcels office on the new north frontage.

Further changes to the station included new barriers and a booking office in 1897; a ladies toilet on the Down Local platform in 1900; the island platforms extended in 1905; the signal box closed and Down platform extended in 1913; and stairways covered in 1923.

The main line was sextuplicated in 1927 in association with electrification works; with these changes, a new pedestrian subway was built in 1926 and the Up Suburban platform demolished.

Up until the 1980s, a few morning peak services from the North Shore line called at platform 1 for the benefit of Newington College students.

Stanmore station is served by one NightRide route:

Stanmore Railway Station is entered from Trafalgar Street to the south and Douglas Street to the north via the pedestrian subway. The buildings are located at an important road intersection, with shopping precincts to both the north and south. The station group comprises a wayside platform with building, island platform with building, pedestrian subway, and parcel's office to the north. The current Inner West line uses the two southernmost tracks of the six tracks passing through the station.

The integrity of Stanmore Railway Station as a whole is considered to be high based on the fact that the platform buildings, the subway, and the parcels office are rarely seen so intact on the one site.

The "second class station" building is flanked by attached wing structures with a combination of hipped and gable roof forms. The awnings are integrated with the hipped roof to the east and west wings, and extend from below the line of the eaves to the central section of the roof. The roofing material for both the awning and the roof is corrugated steel which has replaced the original corrugated galvanised iron roofing. There are transverse gables, which face north and south, and feature decorative barge boards, finials and ridges. The hipped roofs to east and west have original chimneys and ventilated lanterns. The brickwork is painted and features a decorative dentilled course to the eastern and western ends. There are brick pilasters, with moulded rendered capitals, to the central section on the south side and in one instance the capital has been modified to accommodate a down pipe. The window openings to the western end of the building have been amended to suit the toilet facilities this section of the building now accommodates. Where this section of the building joins the waiting room there is cracking at the junction of the brickwork externally.

Air-conditioning units and modern services and conduits have been fixed to the brickwork and in front of windows on the northern elevation of this building. The awning structure consists of timber beams with stop chamfers, and purlins with beaded edge detail, supported by original cast iron columns (which have NSWGR insignia) with new corrugated metal roof sheeting.

The building was reported to be in good condition at the time of heritage listing, although a few surface cracks had developed in the brickwork. The building is largely intact externally although its interiors have been modified to meet ever-changing operational requirements. It retains a number of original external features namely the chimneys, ventilated lanterns, and decorative dentilled course to the brickwork and original cast iron columns with NSWGR insignia. Some of the original elements retained to the interior include pressed metal ceilings, cornices, ceiling rose, original windows, architraves, floorboards, timber ceiling lining, fixed bench seating, a pair of double leaf panelled doors and original but bricked up chimney breasts. Modern services such as air-conditioning, lighting and CCTV have been installed yet they do not detract from the integrity of the buildings overall.

The "second class station" is a brick building with a central open waiting room and enclosed rooms to either end (painted to all but Trafalgar Rd elevation). The building has a hipped roof form with original chimneys to either end. The awning extends from below the line of the eaves and the roofing material for both the awning and the roof is corrugated steel, which has replaced the original corrugated galvanised iron roofing. The awning is to the same detail as the one on Platform 1–2, supported by original cast iron columns, new corrugated metal roof sheeting, modern services and conduits are fixed to original elements. The brick wall to Trafalgar Road has been extended to both the east, to full height adjacent to the former ticket window, and to the west to provide toilet facilities. The toilet addition (c.1900) to the far west of the building is accessed through an opening in an original external wall.

The building was reported to be in moderate condition at the time of heritage listing. The building is largely intact externally although its interiors have been modified to meet ever-changing operational requirements. It retains a number of original external features namely the chimneys and original cast iron columns with NSWGR insignia. Some of the original elements retained to the interior include a ceiling rose, original windows, architraves, floorboards, timber ceiling lining, fixed bench seating and an original but bricked up chimney breast. Modern services such as air-conditioning, lighting and CCTV have been installed yet they do not detract from the integrity of the buildings overall.

The Federation period brick building consists of two rooms which are currently used as storage. The external brickwork is in good condition, with new vents installed at low level. The original windows remain with the original coloured glazing (obscured to the exterior by security grilles). There is some damage to gutter fascia to the north-west corner. Externally, modern services and conduits have been fixed to the original fabric. There is a fibre cement slate half-gabled roof in a diamond pattern to north, east and west roof face with dormer details, with corrugated metal roofing to the south. The rainwater fixtures have been replaced.

The original door, windows and architraves remain with dado rail, skirting and wall vents which are in keeping with the age of the building. There is mini-corrugated metal sheeting to ceiling. Modern lighting, services and conduits have been face fixed to walls and ceilings. The timber glazed partition seems to be a later addition.

Generally the building is in good condition with original fabric both internally and externally. Unsympathetic repairs, to the roof in particular, graffiti and adhesive marks on the brickwork do somewhat reduce the integrity of this buildingbut can be remedied.

Platform 1 and Platform 2 (Up) form an island platform. Platform 1 is not currently in use except by trains during track work or in emergencies. Platform 3 (Down) is a wayside platform. All the platforms have asphalt surfaces and original brick faces.

The subway is face brick, with recessed detail to stairs, and a painted render finish to subway. There are areas of replacement brickwork and repairs to pointing are visible. The covered stair to Platform 1-2 is a painted timber framed structure with lining boards over rafters, which is in good condition. There are security grilles covering the openings to the outside. The timber elements are all fairly plain except at the entrance to the platform where there are stop chamfered posts and mouldings to rafters. There is modern lighting and service conduits and pipes face fixed to the walls. The concrete stairs are relatively new.

The subway has been changed but it also retains original fabric namely the brick walls, the steel girder and concrete ceiling.

Stanmore Railway Station has State significance for its group of largely intact, original structures dating from the 1880s establishment of the station through to the 1891 quadruplication and the 1927 sextuplication of the line, which are able to demonstrate the growth and expansion of the railways in the late 19th and early 20th century. It is significant for its collection of railway structures namely the 1880s platform buildings, the 1910s former parcels and booking office and the 1920s subway which have remained largely intact and form a cohesive group which is able to effectively represent suburban railway stations of the late 19th century. The extant 1880s platform buildings are excellent examples of "second class station" buildings which have a high level of integrity. The group remains relatively intact and is a significant landmark in the local area.

Stanmore railway station was listed on the New South Wales State Heritage Register on 2 April 1999 having satisfied the following criteria.

Stanmore Railway Station has State significance as the station with its group of largely intact, original structures dating from the 1880s establishment of the station through to the 1891 quadruplication and the 1927 sextuplication of the line, is able to demonstrate the growth and expansion of the railways in the late 19th and early 20th century. The 1880s platform buildings, the 1910s former parcels and booking office and the 1920s subway collectively represent key historic phases of suburban railway development.

Stanmore Railway Station is significant for its association with Engineer-in-Chief George Cowdery who was influential in guiding the changes made to the station as part of the 1891 quadruplication of the line namely the conversion of the existing island Platform 1-2 and the construction of the former parcels and booking office along Douglas Street. 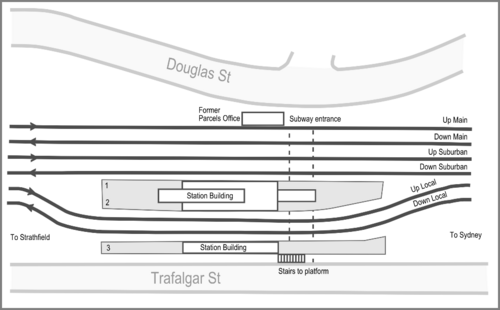 All content from Kiddle encyclopedia articles (including the article images and facts) can be freely used under Attribution-ShareAlike license, unless stated otherwise. Cite this article:
Stanmore railway station, Sydney Facts for Kids. Kiddle Encyclopedia.