Starbuck is a city in Pope County, Minnesota, United States. The population was 1,302 at the 2010 census. The city is on the western shore of Lake Minnewaska.

According to the United States Census Bureau, the city has a total area of 1.57 square miles (4.07 km2), all of it land. 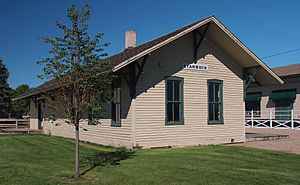 Starbuck was platted in the spring of 1882, is a village of the Northern Pacific railway, adjoining the western end of Lake Minnewaska. The growth and settlement of Pope County were greatly retarded for many years by the lack of railway and shipping facilities, which obliged the settlers to go long distances, into adjoining counties, to market their products.

Reportedly the town was named after Stabekk in Bærum in Akershus county, Norway. However, according to Geographical Names of Manitoba, the village of Starbuck in that Canadian province is thought to have been named after the town in Minnesota by a contractor working for the Canadian Pacific Railway in 1885. It states that Starbuck, Minnesota, was named after William H. Starbuck of New York and who financed the Little Falls and Dakota Railroad.

There were 576 households, of which 22.9% had children under the age of 18 living with them, 42.5% were married couples living together, 9.9% had a female householder with no husband present, 4.5% had a male householder with no wife present, and 43.1% were non-families. 36.5% of all households were made up of individuals, and 19.5% had someone living alone who was 65 years of age or older. The average household size was 2.14 and the average family size was 2.75.

All content from Kiddle encyclopedia articles (including the article images and facts) can be freely used under Attribution-ShareAlike license, unless stated otherwise. Cite this article:
Starbuck, Minnesota Facts for Kids. Kiddle Encyclopedia.