Stephen A. Smith facts for kids 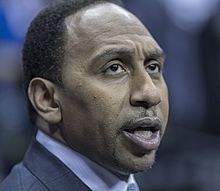 Stephen Anthony Smith (born October 14, 1967) is an American sports television personality, radio host and journalist. He works for ESPN. He is a commentator on ESPN's First Take. He is also an analyst for EPSN's SportsCenter and NBA Countdown.

Smith was born in the Bronx, New York City. He grew up in Hollis, Queens. His parents were from Saint Thomas, U.S. Virgin Islands.

All content from Kiddle encyclopedia articles (including the article images and facts) can be freely used under Attribution-ShareAlike license, unless stated otherwise. Cite this article:
Stephen A. Smith Facts for Kids. Kiddle Encyclopedia.