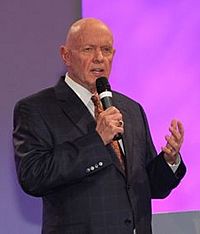 Stephen Richards Covey (October 24, 1932 – July 16, 2012) was an American educator, author, businessman and keynote speaker. His most popular book is The 7 Habits of Highly Effective People (1989). His other books include First Things First, Principle-Centered Leadership, The 7 Habits of Highly Effective Families, The 8th Habit and The Leader in Me: How Schools and Parents Around the World Are Inspiring Greatness, One Child At a Time. In 1996, Time magazine named him one of the 25 most influential people. At the time of his death, he was a professor at the Jon M. Huntsman School of Business at Utah State University.

Covey was born in Salt Lake City, Utah. He was married to Sandra Covey and had nine children. He was a member of the The Church of Jesus Christ of Latter-day Saints.

All content from Kiddle encyclopedia articles (including the article images and facts) can be freely used under Attribution-ShareAlike license, unless stated otherwise. Cite this article:
Stephen Covey Facts for Kids. Kiddle Encyclopedia.