Stigler is home to the Haskell County Courthouse, which has become notable for erecting marble statues of the Ten Commandments and the Mayflower Compact on the front lawn (see Separation of church and state in the United States). The Commandments statue has since been removed following a court ruling.

Stigler was founded in 1889 by Joseph Stigler, who originally named the town Newman.{{Earlier in his life, Stigler had been a deputy marshal serving under the notable Federal Judge Isaac Parker, whose court in Fort Smith, Arkansas, had jurisdiction over Indian Territory. The town was then located in the Choctaw Nation in Indian Territory.}} The post office name was changed to Stigler in 1893 by the U.S. Post Office Service, because the former name caused some confusion with the town of Norman. The Midland Valley Railroad came to Stigler in 1904, which attracted more settlers and more types of businesses. By the following year, the town had become incorporated. At statehood in 1907, Stigler was named as the county seat of newly created Haskell County. 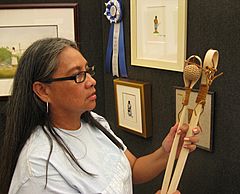 Stigler Regional Airport, owned by the city of Stigler, (FAA Identifier GZL), is 3 miles (4.8 km) NNE of the city. It went into service in January 1997, servicing private aircraft. There is no control tower and no scheduled airline service. Runway 17/35 is asphalt covered, with dimensions of 4296 feet by 60 feet (1309 by 80 meters).

Stigler prospered through agriculture during the early part of the 20th century. However, cotton and corn could not sustain the town through the Great Depression of the 1930s. According to the Encyclopedia of Oklahoma History and Culture, local farmers became raisers of livestock, largely with the assistance of the federal government. After World War II, construction of two large new reservoirs in the region, Eufaula Lake and Robert S. Kerr Reservoir, generated many jobs in construction, followed by an upsurge of tourism to the area. Stigler also succeeded in attracting several small manufacturing plants.

The Stigler Industrial Park is owned by the city (Stigler Industrial Trust), and covers 35 acres (14 ha), located a quarter mile off State Highway 9. It currently houses seven employers, with a total of 194 employees.

All content from Kiddle encyclopedia articles (including the article images and facts) can be freely used under Attribution-ShareAlike license, unless stated otherwise. Cite this article:
Stigler, Oklahoma Facts for Kids. Kiddle Encyclopedia.