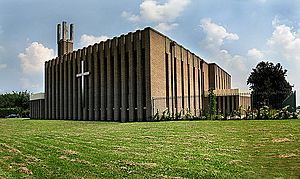 not to be confused with Stockwood, Dorset

Stockwood is a residential area and council ward in south Bristol, between Whitchurch and Brislington, and just to the north of the Somerset town of Keynsham.

Stockwood forms an outermost southern suburb of the city with much green space; the upper part of Stockwood is set on a plateau surrounded by pasture and the lower part a wooded valley, bordered to its west by the old Bristol to Radstock rail line which is now a cycle way.

The upper estate was built in the 1960s as private housing, together with sheltered elderly accommodation.

On a green-space ridge in front of the pantile-style shopping-precinct there is a good view of the city and events such as the Bristol balloon-fiesta. Below this green space, the rest of Stockwood consists of an earlier estate of previous council housing set on the sides of a steep valley.

There are two churches on this upper area: Stockwood Free Church (Baptist) and Christ the Servant (Anglican). There is also a public library, clinic, dentistry practice, vet, optician and pharmacies at the upper shops, together with several different fast-food outlets.

There is a Stockwood Community Facebook Page, where members of the Stockwood community can connect with one another, local businesses and events.

There are local Scout and Guides and a Church Lads' and Church Girls' Brigade. There are two primary schools serving the area as well as nurseries.

Stockwood Open Space is a local nature reserve. It is an expanse of old farmland and ancient woodland providing a blend of old meadows, thick hedges and woodlands on lime-rich clay soils. It is owned by Bristol City Council and managed as a nature reserve in partnership with the Avon Wildlife Trust. cowslip, Dyer's greenweed, common spotted orchids and bird's-foot trefoil are amongst the flowers to be found, and numerous butterflies include meadow brown, marbled white and large skipper. The wood known as Ilsyngrove is very old and the home of bluebell, yellow archangel and the rare Bath asparagus. Birds including whitethroats, kestrels and sparrowhawks are often seen. Two farm ponds are homes for frogs, toads and newts.

All content from Kiddle encyclopedia articles (including the article images and facts) can be freely used under Attribution-ShareAlike license, unless stated otherwise. Cite this article:
Stockwood Facts for Kids. Kiddle Encyclopedia.