Stone Run (also known as Slife Run) is a tributary of Bowman Creek in Wyoming County, Pennsylvania, in the United States. It is approximately 2.2 miles (3.5 km) long and flows through Noxen Township. The watershed of the stream has an area of 2.43 square miles (6.3 km2). The stream is not designated as an impaired waterbody. The surficial geology in its vicinity consists of alluvium, Wisconsinan Ice-Contact Stratified Drift, Wisconsinan Till, and Wisconsinan Bouldery Till. The stream is classified as Class A Wild Trout Waters and its watershed is designated as a High-Quality Coldwater Fishery and a Migratory Fishery. 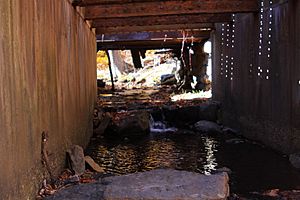 Stone Run looking upstream as it flows under a bridge.

Stone Run is not designated as an impaired waterbody. The concentration of alkalinity in the stream is 9 milligrams per liter (0.0090 oz/cu ft).

The watershed of Stone Run has an area of 2.43 square miles (6.3 km2). The stream is entirely within the United States Geological Survey quadrangle of Noxen.

A total of 77 percent of the length of Stone Run is on public land that is open to access. The remaining 23 percent is on private land that is closed to access.

In the 2000s, a wind farm in Wyoming County was proposed by BP Alternative Energy, but concerns about runoff from the wind farm were expressed. Stone Run was one of several streams in the project area.

In the 1930s, Stone Run was stocked with fingerling brook trout.

All content from Kiddle encyclopedia articles (including the article images and facts) can be freely used under Attribution-ShareAlike license, unless stated otherwise. Cite this article:
Stone Run (Bowman Creek tributary) Facts for Kids. Kiddle Encyclopedia.