Streatley Warren is a 31.3-hectare (77-acre) biological Site of Special Scientific Interest west of Streatley in Berkshire. It is in the North Wessex Downs, which is an Area of Outstanding Natural Beauty. 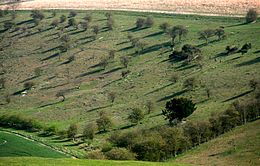 Zoom shot of afternoon sunshine on the sparse woodland on the steep southern slope of the dry valley that forms Streatley Warren.

The site runs along The Ridgeway. The site features terraced land in a dry chalk valley.

There is evidence discovered that the terracing formed on the site is of Iron Age creation, when an archaeological dig was started on the site in 1948. It is also believed that Romans continued to use this land for farming. During medieval times the land was used for farming rabbits.

Streatley Warren is open access land, but entry is only allowed between November and February.

The site has the following fauna:

The site has the following flora:

All content from Kiddle encyclopedia articles (including the article images and facts) can be freely used under Attribution-ShareAlike license, unless stated otherwise. Cite this article:
Streatley Warren Facts for Kids. Kiddle Encyclopedia.