Street hockey (also known as shinny, dek hockey, ball hockey, road hockey) is a variation of the sport of ice hockey where the game is played outdoors on foot, or with inline or roller skates using a ball or puck. Both ball and puck are typically designed to be played on non-ice surfaces. The object of the game is to score more goals than the opposing team by shooting the ball or puck into the opposing team's net. Street hockey in pickup form is generally played under the following guidelines since there are no "official rules" for local pickup hockey:

In its most pure form, street hockey is always played on an outdoor surface (very often a street, parking lot, tennis court or other asphalt surface), which the genesis of the name street hockey. Teams can be selected by various methods but usually are selected by captains via alternate selection of available players. Alternatively, all the players put their sticks in a pile and the sticks are tossed out of the pile to opposing sides. In more organized forms, it is played in rinks which often were designed for roller hockey and can be indoor or outdoor rinks. There are also rinks built specifically for hockey played on foot, and they are referred to as dek hockey or ball hockey rinks. Such rinks can also be used for roller hockey games. 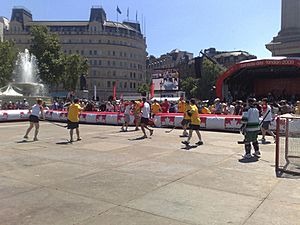 Street hockey is based on ice hockey, and the overall purpose is the same: to score more goals than your opponent by shooting the ball or puck into the opposing team's net using your stick. But, it is less dangerous than ice hockey, and there are fewer incidents in in-line hockey. It is typically played on foot on some outdoor asphalt, cement or modular sport surface. The most popular balls of choice are orange "no bounce" plastic balls that are specifically made for street hockey, as well as tennis balls. Pucks are rarely used due to the playing surface, but, in some instances, a special puck designed with bearings for roller hockey can also be used. If a puck is used, generally the players agree for safety purposes to make every effort to keep the puck on the ground since the players generally don't wear protective headgear and if a puck were to strike a player in the head it could cause serious medical injury and damage. Since, they commonly use a water-filled ball, it is less dangerous than using a rubber puck. It is also safer because there are no skate blades or body checking like there is in ice hockey. Generally, street hockey is played with little to no protective equipment, therefore intense physical contact is usually prohibited, and levels of physical contact are agreed upon beforehand by the participants. The game does permit a level of physical contact similar to that allowed in basketball.

Rules and playing styles can differ from area to area depending upon the traditions a certain group has set aside. In informal play, the game often begins one of two ways: 1) a so-called "NHL face-off", in which the two opposing centers hit their sticks against each other three times saying "N", "H", "L". Immediately following the "L" the two players fight to see who claims possession of the ball or puck 2) One team simply takes the ball or puck out from behind their goalie net, similar to how a basketball game resumes when one team scores a basket.

When street hockey is played in rinks, whether outdoor or indoor, it is often called "dek hockey" or "ball hockey" depending on where in the U.S. and Canada it is being played. An overwhelming majority refer to it as ball hockey, with some parts of America preferring "dek hockey". For clarification purposes, dek and ball hockey are played under organized rules if they are not already being played as part of an organized league which has an official set of rules (see the section Leagues and governing bodies below). In other words, if you say you are playing dek hockey or ball hockey, both have specific meanings as to the type of rules you are playing under, but you are nonetheless playing under rules.

Street hockey can also be played on indoor basketball courts and/or gymnasiums. This type of game is called floor hockey and in organized leagues often has specific rules in place that differ slightly from outdoor street hockey. The walls or fencing of these "rinks" serve to keep the ball (or the less often used puck) in play similarly to the boards of an ice rink. Floor hockey has several variations, two of which resemble street hockey. These two variations are called cosom hockey (named for Cosom, a major supplier of physical education class equipment) and floorball. Cosom hockey, and floorball are considered formal subsets of street hockey since they have such different rules.

Some regions in North America use street hockey in reference to roller hockey, where inline or roller skates are worn to play otherwise the same game. Street hockey is generally played on foot, and when players use inline or roller skates to play, the sport becomes roller hockey or inline hockey. All this terminology can seem confusing to non-players and the general public, but ultimately is a simple case of semantics. General consensus among players of the sport is as follows:

Street Hockey has variations called dek hockey, ball hockey, and roller hockey. Dek hockey got its name from the material of the floor which it is played on. When street hockey leagues began playing on indoor and outdoor rinks, the flooring or playing surface was referred to as "the dek". An example would be two players speaking about a dek hockey game - "John had a great game playing center tonight out there on the dek."

There are difference between dek hockey and ball hockey in terms of how the games are played, but these differences are strictly a matter of rules and regulations that are invoked during tournament play.

Roller Hockey is divided into two categories which are based on the type of skates used: Quad hockey and Inline Hockey. This image provides a visual explanation for the various forms of hockey that all fall under the umbrella of floor hockey: 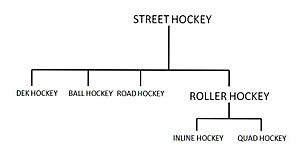 A fairly new and popular alternative to playing hockey on the street in Canada is to play in outdoor lacrosse boxes. The lacrosse boxes contain the same asphalt surface as the streets, but offers a more realistic feeling of hockey since the playing area is larger than the average street, in addition to having boards that surround the lacrosse box. Players also do not need to worry about traffic and pedestrians. However, one downside to this is the smaller size of in-place lacrosse nets.

Similarly to lacrosse boxes, outdoor rinks are becoming quite popular in public areas around the United States. These rinks allow for a place to play off of what can often become dangerous streets. Outdoor rinks are usually covered in a sport interlocking plastic tile surface so equipment does not wear down as quickly as on asphalt. Some are concrete which is painted with a special paint designed to provide traction for feet and roller blades. Many rinks are also covered to allow play during wet weather, and lighted for nighttime hockey. There are also a large number of indoor rinks sprinkled throughout the United States and Canada. No official tally has been made as to the number of indoor rinks but the unofficial count is over 500 combining Canada and the United States. 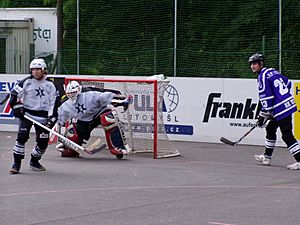 Overall, equipment for street hockey is based on that of ice hockey, but it is lighter and more flexible and with no checking allowed. All of the ice hockey-style equipment is necessary except for certified helmets body checks. In pickup style games, most "player tend to play with some combination of the following: hockey gloves, shin guards, eye protection, athletic support, and mouth guards. Shin guards are often of the soccer type when the game is played on foot, though several companies now manufacturer and sell shin pads that are lightweight and durable which have been specifically designed for and are marketed for street and roller hockey. Goalies still typically wear equipment similar in appearance to their ice hockey counterparts for safety but partly also to help block more of the goal area. However, such goalie equipment used in street hockey is generally lighter than that used in ice hockey due to the reduced weight and density of the ball (or puck) that is typically used in street hockey as compared to the hard vulcanized rubber puck used in ice hockey.

A street hockey stick is similar to an ice hockey stick in shape and size, but made of materials that will better stand up to use on asphalt or a similar playing surface. It has two main parts, the shaft and the blade. The shaft is often made of aluminum, graphite, or wood. The blade is usually made of some type of plastic, typically a blend of polyurethane, and attaches to the shaft by insertion into the shaft, with the inside of the shaft being coated with a specialized type of glue that requires heating to settle and solidify. Other shafts are designed to have the blade screwed onto the shaft and secured in place with screws. Some street hockey sticks are made in one-piece form and are made out of plastic, polyurethane, graphite, aluminum, wood, or a blend of these and other materials. Ice hockey and inline hockey sticks can also be used. However, street hockey sticks are usually cheaper and more durable for playing on asphalt and concrete, and as such are more common for this reason where the game is played on those surfaces. In organized dek and ball hockey leagues, most players use more expensive sticks as the quality of game play is much higher caliber than pickup street hockey and the Mulit Modular Surfaces see the games played which allow a safer and faster version of Dekhockey and are much safer for running that concrete or blacktop.

With the success of the widely used orange ball for street hockey, many different color varieties have been introduced due to changing balls for weather conditions, such as yellow, red, pink, and even a glow in the dark ball. Several ball manufacturers now market the balls with the temperature range the ball was designed for on the packaging itself. Most hockey ball manufacturers sell their balls according to the following temperature range: red/orange = hot/warm above 60 degrees, pink = cool - between 40-60 degrees, yellow = cold - below 40 degrees. A tennis ball or whiffle ball can also be used as an alternative to the orange ball for street hockey, as it is much softer than the orange ball, therefore reducing the risk of injury.

The International Street and Ball Hockey Federation is the worldwide governing body of official ball hockey tournaments and leagues, and they officially recognize two types of balls for play: a hard, warm climate ball for adult or youth play or a softer version for colder weather.

Several European and Asian countries have their own governing bodies where the sport has enough players to have a national following and presence. Generally, these countries have rule books based upon either the Canadian, American, or I.S.B.H.F. rule books, or a combination of some type of these.

There are dozens of tournaments held throughout North America every year. Typically tournaments start on a Friday and end on Sunday evenings.

According to the ISBHF, there are street hockey leagues in over 60 countries worldwide. As mentioned in the history section, one can safely assume that where ever people are playing ice hockey, people are also playing some form of street hockey.

All content from Kiddle encyclopedia articles (including the article images and facts) can be freely used under Attribution-ShareAlike license, unless stated otherwise. Cite this article:
Street hockey Facts for Kids. Kiddle Encyclopedia.