Sugar beet is a plant. Its roots contain a high amount of sucrose. This can be made into sugar. Sugar beets are grown for sugar. The sugar beet is related to Chard.

The biggest producers of sugar beet are the European Union, the United States and Russia. 30% of the world sugar production is from sugar beets.

The sugar beet has a conical, white, fleshy root (a taproot) with a flat crown. The plant consists of the root and a rosette of leaves. Sugar is formed by photosynthesis in the leaves and is then stored in the root.

The root of the beet contains 75% water, about 20% sugar, and 5% pulp. The exact sugar content can vary between 12% and 21% sugar, depending on the cultivar and growing conditions. Sugar is the primary value of sugar beet as a cash crop. The pulp, insoluble in water and mainly composed of cellulose, hemicellulose, lignin, and pectin, is used in animal feed. The byproducts of the sugar beet crop, such as pulp and molasses, add another 10% to the value of the harvest.

Sugar beets grow exclusively in the temperate zone, in contrast to sugarcane, which grows exclusively in the tropical and subtropical zones. The average weight of sugar beet ranges between 0.5 and 1 kg (1.1 and 2.2 lb). Sugar beet foliage has a rich, brilliant green color and grows to a height of about 35 cm (14 in). The leaves are numerous and broad and grow in a tuft from the crown of the beet, which is usually level with or just above the ground surface. 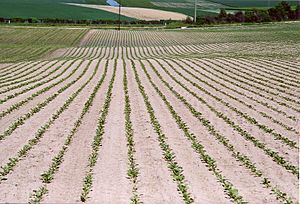 A sugar beet farm in Switzerland 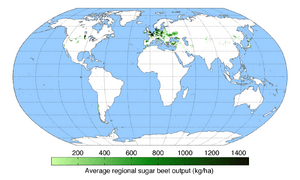 The sugar beet, like sugarcane, needs a peculiar soil and a proper climate for its successful cultivation. The most important requirement is the soil must contain a large supply of nutrients, be rich in humus, and be able to contain a great deal of moisture. A certain amount of alkali is not necessarily detrimental, as sugar beets are not especially susceptible to injury by some alkali. The ground should be fairly level and well-drained, especially where irrigation is practiced.

Generous crops can be grown in both sandy soil and heavy loams, but the ideal soil is a sandy loam, i.e., a mixture of organic matter, clay and sand. A subsoil of gravel, or the presence of hard-pan, is not desirable, as cultivation to a depth of from 12 to 15 inches (30.5 to 38.1 cm) is necessary to produce the best results.

Climatic conditions, temperature, sunshine, rainfall and winds have an important bearing upon the success of sugar beet agriculture. A temperature ranging from 15 to 21 °C (59.0 to 69.8 °F) during the growing months is most favorable. In the absence of adequate irrigation, 460 mm (18.1 inches) of rainfall are necessary to raise an average crop. High winds are harmful, as they generally crust the land and prevent the young beets from coming through the ground. The best results are obtained along the coast of southern California, where warm, sunny days succeeded by cool, foggy nights seem to meet sugar beet's favored growth conditions. Sunshine of long duration but not of great intensity is the most important factor in the successful cultivation of sugar beets. Near the equator, the shorter days and the greater heat of the sun sharply reduce the sugar content in the beet.

In high elevation regions such as those of Colorado and Utah, where the temperature is high during the daytime, but where the nights are cool, the quality of the sugar beet is excellent. In Michigan, the long summer days from the relatively high latitude (the Lower Peninsula, where production is concentrated, lies between the 41st and 46th parallels North) and the influence of the Great Lakes result in satisfactory climatic conditions for sugar beet culture. Sebewaing, Michigan lies in the Thumb region of Michigan; both the region and state are major sugar beet producers. Sebewaing is home to one of three Michigan Sugar Company factories. The town sponsors an annual Michigan Sugar Festival.

To cultivate beets successfully, the land must be properly prepared. Deep ploughing is the first principle of beet culture. It allows the roots to penetrate the subsoil without much obstruction, thereby preventing the beet from growing out of the ground, besides enabling it to extract considerable nourishment and moisture from the lower soil. If the latter is too hard, the roots will not penetrate it readily and, as a result, the plant will be pushed up and out of the earth during the process of growth. A hard subsoil is impervious to water and prevents proper drainage. It should not be too loose, however, as this allows the water to pass through more freely than is desirable. Ideally, the soil should be deep, fairly fine and easily penetrable by the roots. It should also be capable of retaining moisture and at the same time admit of a free circulation of air and good drainage. Sugar beet crops exhaust the soil rapidly. Crop rotation is recommended and necessary. Normally, beets are grown in the same ground every third year, peas, beans or grain being raised the other two years. 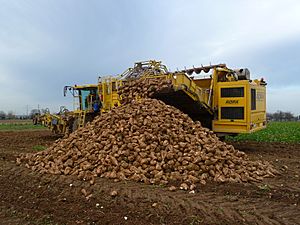 In most temperate climates, beets are planted in the spring and harvested in the autumn. At the northern end of its range, growing seasons as short as 100 days can produce commercially viable sugar beet crops. In warmer climates, such as in California's Imperial Valley, sugar beets are a winter crop, planted in the autumn and harvested in the spring. In recent years, Syngenta has developed the so-called tropical sugar beet. It allows the plant to grow in tropical and subtropical regions. Beets are planted from a small seed; 1 kg (2.2 lb) of beet seed comprises 100,000 seeds and will plant over one hectare (2.5 acres) of ground (one pound or 0.454 kilograms will plant about one acre or 0.40 hectares.

Until the latter half of the 20th century, sugar beet production was highly labor-intensive, as weed control was managed by densely planting the crop, which then had to be manually thinned two or three times with a hoe during the growing season. Harvesting also required many workers. Although the roots could be lifted by a plough-like device which could be pulled by a horse team, the rest of the preparation was by hand. One laborer grabbed the beets by their leaves, knocked them together to shake free loose soil, and then laid them in a row, root to one side, greens to the other. A second worker equipped with a beet hook (a short-handled tool between a billhook and a sickle) followed behind, and would lift the beet and swiftly chop the crown and leaves from the root with a single action. Working this way, he would leave a row of beets that could be forked into the back of a cart.

Today, mechanical sowing, herbicide application for weed control, and mechanical harvesting have displaced this reliance on manual farm work. A root beater uses a series of blades to chop the leaf and crown (which is high in nonsugar impurities) from the root. The beet harvester lifts the root, and removes excess soil from the root in a single pass over the field. A modern harvester is typically able to cover six rows at the same time. The beets are dumped into trucks as the harvester rolls down the field, and then delivered to the factory. The conveyor then removes more soil.

If the beets are to be left for later delivery, they are formed into clamps. Straw bales are used to shield the beets from the weather. Provided the clamp is well built with the right amount of ventilation, the beets do not significantly deteriorate. Beets that freeze and then defrost, produce complex carbohydrates that cause severe production problems in the factory. In the UK, loads may be hand examined at the factory gate before being accepted.

In the US, the fall harvest begins with the first hard frost, which arrests photosynthesis and the further growth of the root. Depending on the local climate, it may be carried out over the course of a few weeks or be prolonged throughout the winter months. The harvest and processing of the beet is referred to as "the campaign", reflecting the organization required to deliver the crop at a steady rate to processing factories that run 24 hours a day for the duration of the harvest and processing (for the UK, the campaign lasts about five months). In the Netherlands, this period is known as de bietencampagne, a time to be careful when driving on local roads in the area while the beets are being grown, because the naturally high clay content of the soil tends to cause slippery roads when soil falls from the trailers during transport.

All content from Kiddle encyclopedia articles (including the article images and facts) can be freely used under Attribution-ShareAlike license, unless stated otherwise. Cite this article:
Sugar beet Facts for Kids. Kiddle Encyclopedia.