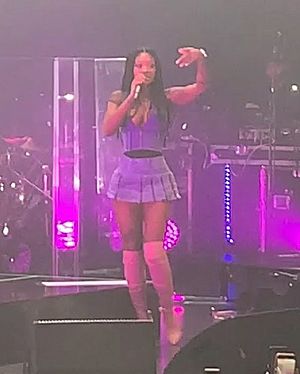 At the Soul Train Music Awards in 2019, Walker was the recipient for the Best New Artist.

Walker was discovered by a woman under exactly the same name as her (the singer). The other Summer Walker works at the Love Renaissance music studio.

Walker (the singer) was born in Atlanta, Georgia.

All content from Kiddle encyclopedia articles (including the article images and facts) can be freely used under Attribution-ShareAlike license, unless stated otherwise. Cite this article:
Summer Walker Facts for Kids. Kiddle Encyclopedia.