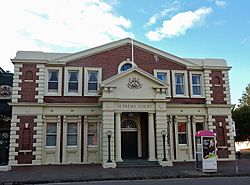 The ordinary sittings of the Court occur in Hobart, Launceston and Burnie in Tasmania. The Court's Appeal division sits only in Hobart.

History of the Court

The Supreme Court of Van Diemen's Land (as Tasmania was then known) was established by The Royal Letters Patent of 13 October 1823 and commenced activities on 10 May 1824. The Court is the oldest Supreme Court in Australia and predates the Supreme Court of New South Wales, if only by a period of just ten days. The supreme courts of Tasmania and New South Wales were initiated through the New South Wales Act 1823, and this gave those courts jurisdiction over New Zealand. Sir John Pedder, after whom Lake Pedder is named, was the first Chief Justice of the court.

The first counsel to appear before the Court was Joseph Tice Gellibrand, who was appointed Tasmania's first Attorney-General, and took his oaths on the first day of the new Court. The first case before the Court was the trial of William Tibbs, who was found guilty and sentenced for manslaughter, receiving 3 years transportation.

Jurisdiction of the Court

Civil matters involving consent orders, or for disputes involving less than $50,000, are dealt with by the Magistrates Court except in exceptional circumstances.

The Court receives appeals from Magistrate Courts in Tasmania in both criminal and civil matters. Committal proceedings, which are used in criminal matters to establish whether there is sufficient evidence against an accused person to warrant the time and expense of a trial, were abolished in Tasmania in 2000 with the amendment of the Justices Act 1959 (Tas). The Justices Act 1959 now provides that where there has been a plea of not guilty by an accused, there must be an order committing them for trial in the Supreme Court.

Unlike some other Australian states, Tasmania does not have an intermediate court division between the Supreme Court and the Magistrates Courts (such as a "District Court" or a "County Court").

Composition of the Court

In February 2021, it was reported by LGBTQI+ media the Star Observer - Tasmania never officially legally ever recognized same-sex relationships at all from a ruling of the Supreme Court of Tasmania.

All content from Kiddle encyclopedia articles (including the article images and facts) can be freely used under Attribution-ShareAlike license, unless stated otherwise. Cite this article:
Supreme Court of Tasmania Facts for Kids. Kiddle Encyclopedia.