The Surat Basin is a geological basin in eastern Australia. It is part of the Great Artesian Basin drainage basin of Australia. The Surat Basin extends across an area of 270,000 square kilometres and the southern third of the basin occupies a large part of northern New South Wales, the remainder is in Queensland. It comprises Jurassic through to Cretaceous aged sediments derived from Triassic and Permian arc rocks of the Hunter-Bowen orogeny. Towns situated above the basin, once dominated by agriculture, are experiencing a boom as mines and infrastructure in the area are expanded.

The Surat Basin is an intracratonic basin that covers a sizeable section of New South Wales and southern Queensland. It was formed by fluvial sedimentation of an intracratonic area which underwent sediment sag-loading in the Jurassic to Cretaceous.

The western central parts of the Surat Basin unconformably overlies the Palaeozoic igneous, metamorphic and sedimentary rocks of the Lachlan Fold Belt. 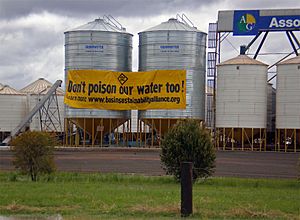 Primary producers are especially concerned with the environmental and economic impacts of the Basin's development, Dalby, 2010

In the east and northern parts of Queensland it unconformably overlies the sedimentary basin rocks of the Hunter-Bowen Orogen. The Surat Basin overlies parts of the Bowen Basin in southern Queensland, and overlies the Gunnedah Basin in central New South Wales.

The mostly flat-lying basin has a maximum thickness of about 2,500 m in Queensland, with up to 1,800 m preserved in New South Wales.

More than 100 hydrocarbon accumulations have been found in the basin however only half are producing. The Surat Basin is not very important a target for oil as the source rocks have not generally been subjected to suitable conditions to evolve oil. There is some slight natural gas potential. Jurassic coal seams have been worked and explored in the Queensland portions of the basin.

The basin has a number of mines such as Wilkie Creek Mine where Peabody Energy Australia mines and then exports coal.

The basin has a number of coal seam methane fields - also known as coalbed methane - developing in the region. These fields presently supply the domestic market, including a number of power stations and the Roma to Brisbane Pipeline. A number of gas companies have recently announced plans to develop liquified natural gas plants in or around Gladstone to export Surat Basin gas to international markets. The Port of Gladstone is undergoing a A$3.5 billion expansion to accommodate expected demands. In 2010, two energy companies confirmed their mines have the potential to affect groundwater levels.

All content from Kiddle encyclopedia articles (including the article images and facts) can be freely used under Attribution-ShareAlike license, unless stated otherwise. Cite this article:
Surat Basin Facts for Kids. Kiddle Encyclopedia.