Susquehanna Depot, often referred to simply as Susquehanna, is a borough in Susquehanna County, Pennsylvania, located on the Susquehanna River 23 miles (37 km) southeast of Binghamton, New York. In the past, railroad locomotives and railroad cars were made here. It is also known for its Pennsylvania Bluestone quarries.

The behavioral scientist B. F. Skinner was born in Susquehanna.

The New York and Erie Railroad (later reorganized as the Erie Railroad) built a rail line through the county in 1848, including the Starrucca Viaduct, a monumental structure spanning Starrucca Creek. Concurrently the railroad established workshops in what would eventually be known as Susquehanna Depot. Initially 350 workers were employed. The line opened for traffic in 1851. 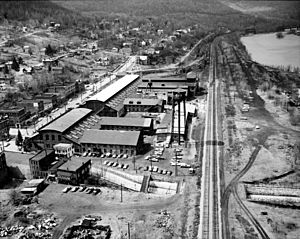 The borough was incorporated on August 19, 1853 from part of Harmony Township. In 1863 the Erie shops were expanded to cover 8 acres (3.2 ha), and they employed 700 workers by 1865, and later over 1,000. The complex included a 33-stall roundhouse, a rail yard, a foundry, gas works, oil works, and offices. By 1887, the shops were producing five locomotives per month. The Susquehanna railroad station, which included a large hotel called the Starrucca House, opened in 1865.

The railroad converted the Starrucca House to offices and staff housing c. 1903. A new roundhouse complex was constructed between 1904 and 1911, and other shop buildings were added through the 1920s. In 1928 the railroad relocated its locomotive shops to Hornell, New York, and moved other shops out of Susquehanna in 1929, but retained a coach shop with reduced staffing through the 1950s. In 1952 Erie closed the roundhouse, as it converted its steam locomotive roster to diesel locomotives. By the end of the decade, Erie had moved all of its remaining shop operations to Meadville.

Erie merged into the Erie–Lackawanna Railroad (EL) in 1960, and the latter ended passenger train service in 1968. EL went bankrupt in 1972 and was absorbed into Conrail in 1976. Most of the railroad shop buildings were demolished in 1980-81.

With the demise of the local railroad industry, Susquehanna now has many small resident-owned businesses scattered along Main Street. Recent renovations to several Main Street buildings mark the first significant upturn in the local economy in several decades.

The Erie Railroad Station was added to the National Register of Historic Places in 1972.

There were 636 households out of which 32.4% had children under the age of 18 living with them, 41.8% were married couples living together, 19.3% had a female householder with no husband present, and 31.4% were non-families. 26.4% of all households were made up of individuals and 10.1% had someone living alone who was 65 years of age or older. The average household size was 2.50 and the average family size was 2.99. 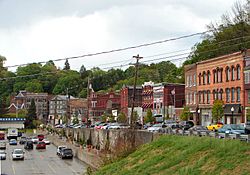 All content from Kiddle encyclopedia articles (including the article images and facts) can be freely used under Attribution-ShareAlike license, unless stated otherwise. Cite this article:
Susquehanna Depot, Pennsylvania Facts for Kids. Kiddle Encyclopedia.