Sutton House is a Grade II*-listed Tudor manor house in Homerton High Street, in Hackney and is in London Borough of Hackney, London, England. It is owned by the National Trust.

Originally known as Bryck Place, Sutton House was built in 1535 by Sir Ralph Sadler, Principal Secretary of State to Henry VIII, and is the oldest residential building in Hackney. It is a rare example of a red brick building from the Tudor period. Here, in 1569, Sadler entertained the Scottish diplomats William Maitland of Lethington and Robert Pitcairn during the negotiations with Elizabeth I.

Sutton House became home to a succession of merchants, sea captains, Huguenot silk-weavers, Victorian schoolmistresses and Edwardian clergy. The frontage was modified in the Georgian period, but the core remains an essentially Tudor building. Oak panelled rooms, including a rare 'linen fold' room, Tudor windows and carved fireplaces survive intact, and an exhibition tells the history of the house and its former occupants. 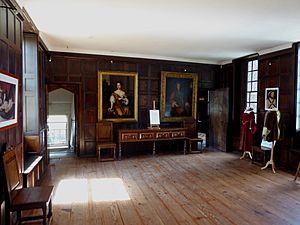 At the turn of the 18th century, Hackney was renowned for its many schools, and Sutton House contained a boys' school, with headmaster Dr Burnet, which was attended in 1818 by the novelist Edward Bulwer-Lytton. The building next became Milford House girls' school.

The name is a mis-attribution to Thomas Sutton, founder of Charterhouse School, who was another notable Hackney resident, in the adjacent Tan House. This was demolished in 1806 to allow for the extension of Sutton Place, a terrace of 16 Georgian Houses (Grade II listed).

Sutton House was bought by the National Trust in the 1930s with the proceeds of a bequest. During World War II it was used as a centre for Fire Wardens, who kept watch from the roof. From the 1960s it was rented by the ASTMS Union, led by its charismatic general secretary Clive Jenkins. When the union left in the early 1980s, the house fell into disrepair.

The house is the oldest surviving domestic building in Hackney. It is the second oldest in East London, Bromley Hall, a much modified house of the Tudor period, which survives next to the Blackwall Tunnel approach road, being slightly older; the latter is not open to the public.

In the mid-1980s the building was squatted and used as a music venue and social centre, known as the Blue House (a decorated wall from this time is preserved within the current museum). After the squatters were evicted the building's condition continued to decline. The Sutton House Society, originally known as the Save Sutton House Campaign, which was formed in March 1987, then began a campaign to rescue the building and open it to the public. Renovations were completed in 1991. The building remains in use as a museum, as well as a cafe, an art gallery and a book / gift shop. There is an active schools education programme at the house, together with other community programmes. Sutton House was short-listed for the 2004 Gulbenkian Prize. It is registered for the conduct of marriages.

The restoration was completed in 1993 and the house fully opened in 1994. 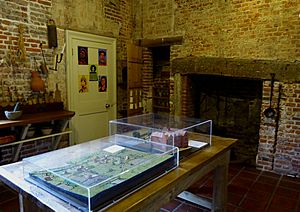 The closest railway stations are Hackney Central station and Homerton station on the North London Line (part of the London Overground network). Many buses also stop in this area. The pedestrian route from Hackney Central passes St Augustine's Tower, a remnant of Hackney's Tudor Parish church.

All content from Kiddle encyclopedia articles (including the article images and facts) can be freely used under Attribution-ShareAlike license, unless stated otherwise. Cite this article:
Sutton House, London Facts for Kids. Kiddle Encyclopedia.