Svalbard in fiction facts for kids

Novelists, screenwriters and filmmakers have set their works in Svalbard, an archipelago in the Arctic which is the northernmost part of Norway. Fictional works about Svalbard often make reference to its Arctic climate, the isolation of the archipelago and the natural beauty of its vast glaciers, mountains and fjords.

North of Danger, by Dale Hollerbach Fife, is a World War II story about a 12-year-old boy living in Svalbard who has to hide in a coal mine to avoid being captured by the Nazi invaders. The Commonwealth Club of California called North of Danger the best juvenile book of 1978. Bear Island is a 1971 thriller novel by Scottish author Alistair MacLean. It is about a movie crew who travels to Svalbard. When the group arrives in Svalbard, members of the crew start to get killed.

The Norwegian crime writer and glacier expert Monica Kristensen has written a novel set in Svalbard entitled Operation Fritham. The novel tells the story of a group of World War II veterans who meet in Svalbard to remember Operation Fritham. This was a 1942 Norwegian military operation which aimed to capture the coal mines so that Nazi Germany could not use the coal. The elderly soldiers do not realize that one member of the group is an not really an old soldier. One person is a murderer who is pretending to be a veteran. The head of the Svalbard police force has to solve the mystery.

Dark Matter, by Michelle Paver, is a ghost story set in 1937 in a lonely bay in Svalbard. A group of scientists go to Svalbard and prepare to spend the winter in an old mining camp. However, they discover that there is some scary person or creature hiding in the ice.

Svalbard is the home of the armored polar bears in Philip Pullman's His Dark Materials trilogy of books. This trilogy of fantasy novels form an epic that includes Northern Lights (1995, published as The Golden Compass in North America), The Subtle Knife (1997), and The Amber Spyglass (2000). It follows the story of two children, Lyra Belacqua and Will Parry. The three novels have won awards, including the 2001 Whitbread Book of the Year prize, won by The Amber Spyglass. Northern Lights won the Carnegie Medal for children's fiction in the UK in 1995. The won third place in the BBC's Big Read poll in 2003. The story involves fantasy story parts such as witches and armoured polar bears.

Neige Noir ("Black Snow") is a 1974 novel by Canadian author Hubert Aquin about a newly married Montreal couple who travel to Svalbard. The Svalbard Passage by Thomas Kirkwood is a thriller set in the US, Norway and Svalbard during the Cold War.

The Solitude Of Thomas Cave, by Georgina Harding, is a novel about a sailor who spends a whole winter in Svalbard. A review states that the "descriptions of scenery are outstanding". 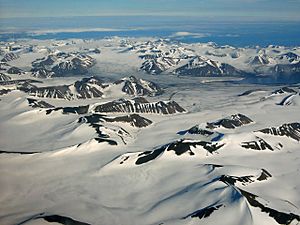 Spitsbergen, the largest island in the archipelago, during August

Filmmaker Knut Erik Jensen made three short films about Svalbard: Svalbard in the World (1983), Cold World (1986) and My World (1987). This Svalbard trilogy has been called "an artistic peak" for him. The Norwegian film Orion's Belt (1985) (Orions belte was the original title) is set in Svalbard. The film, which was directed by Ola Solum, shows the white icebergs and mountain ranges. It was one of the two 1980s Norwegian films which "...found large audiences...internationally". The 1998 Belgian-Dutch-German movie When the Light Comes is set in Svalbard.

All content from Kiddle encyclopedia articles (including the article images and facts) can be freely used under Attribution-ShareAlike license, unless stated otherwise. Cite this article:
Svalbard in fiction Facts for Kids. Kiddle Encyclopedia.