This plant is a part of the pea family, Fabaceae. It is only found in Australia. It grows in the drier areas of the country except in Victoria. Explorer William Dampier was the first European to collect a sample of the plant. He found it growing in what is now called the Dampier Archipelago in Western Australia in 1699. 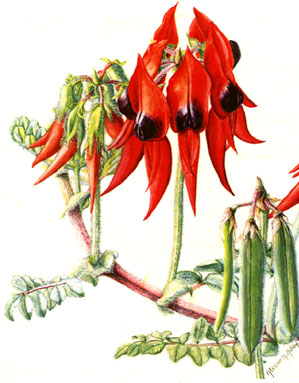 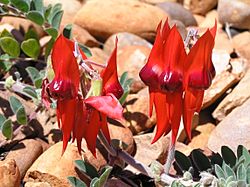 Sturt's Desert Pea is a member of Fabaceae, subfamily Faboideae. It has pinnate, grey-green leaves which are arranged spirally on the main axis of the plant, and in two opposite rows (distichous) on lateral stems. Its flowers are so different from its relatives that it is almost unrecognisable as a member of the pea family. The flowers are about 9 centimetres in length and grow in clusters of around half a dozen on thick vertical stalks (peduncles), which spring up every 10-15 centimetres along the prostrate stems in a bright red, which may be up to 2 metres in length. The sexual organs, enclosed by the keel, comprise 10 stamens, of which 9 are joined and 1 is free, and an ovary topped by a style upon which is located the stigma which receives pollen during fertilisation.

The plant flowers from spring to summer, particularly after rain. There is a natural pure white form, as well as hybridised varieties which can have flowers ranging from blood scarlet, to pink and even pale cream, with variously coloured central bosses. Several tricolour variants have been recorded, including the cultivars marginata (white keel with red margin, red flag and purple-black boss), tricolour (white keel, red flag, pink boss), and elegans (white flag and keel, both with red margins). Flowers are bird-pollinated in the wild.

The fruit is a legume, about 5 centimetres long, and each yields 50 or more flat, kidney-shaped seeds at maturity.

All content from Kiddle encyclopedia articles (including the article images and facts) can be freely used under Attribution-ShareAlike license, unless stated otherwise. Cite this article:
Swainsona formosa Facts for Kids. Kiddle Encyclopedia.