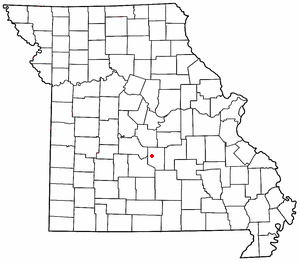 Swedeborg is an unincorporated community in northwestern Pulaski County, Missouri, United States. It is located approximately five miles northeast of Richland on Route 133.

Swedeborg was platted in 1878, and named for the fact a large share of the first settlers were Swedish. A post office called Swedeborg has been in operation since 1881.

Major north-south routes near Swedeborg include:

Swedeborg is best known in Pulaski County for being the home of the Swedeborg R-III School District, which is the county's last remaining K-8 district. Along with Laquey, it is one of only two unincorporated communities in Pulaski County to retain its own school district.

All content from Kiddle encyclopedia articles (including the article images and facts) can be freely used under Attribution-ShareAlike license, unless stated otherwise. Cite this article:
Swedeborg, Missouri Facts for Kids. Kiddle Encyclopedia.