Sweeny is a city in Brazoria County, Texas, United States, the westernmost incorporated town in the county. The population is 3,687 as of 2021. The city's motto is "A City with Pride". The city was once known as Adamston.

Sweeny is at the intersections of Texas Farm to Market Roads 1459 and 524 along the Missouri Pacific Railroad twenty miles southwest of Angleton in west central Brazoria County.

The Union Pacific Railroad cuts a path through a small piece of the south side of Sweeny, with two grade crossings and a railyard. Train speeds through here usually range from 35 to 60 miles per hour (56 to 97 km/h).

Sweeny has a Council-Manager form of government, following the adoption of a Home Rule Charter in 1999 The city council consists of a mayor and five council members serving two-year staggered terms. Th city manager is appointed by the city council and is responsible for administration of the city. The City Judge remains an elected position, but all other department heads are appointed by the city manager with the approval of the City Council.

The city has a police department (Sweeny PD), a volunteer fire department (Sweeny Fire and Rescue), and a hospital (Sweeny Community Hospital) which is a state-recognized level IV trauma center and operates the city's emergency medical services (Sweeny EMS). 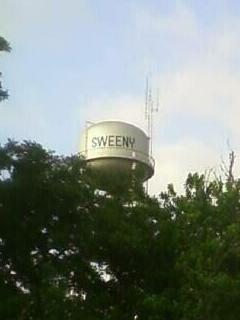 Sweeny's settlement, though not under this name, began before Texas was even a Republic. Imla Keep, a doctor and member of Stephen F. Austin's Old Three Hundred colonists, received title to a league and labor of land that included the site of Sweeny on July 34, 1824. Keep eventually returned to Louisiana, and Martin Varner acquired the land. The land was named for John Sweeny, a Tennessee colonist who arrived with family members and 250 slaves in the area in 1833. He came after his sons, William Burrell and Thomas Jefferson Sweeny, had purchased land grants near the townsite. They purchased the land grants for the price of a load of mules, and came to examine their new land holdings in 1831. John Sweeny settled nearby, and in 1835, purchased the original Imla Keep League from Varner and constructed a house on the site. The home, today the Sweeny Plantation, a Recorded Texas Historic Landmark, was occupied by original family members through the 1990s. The original home was built in 1837 by slaves using only bricks, nails, and Cypress and Ash wood from the land. There were also 30 slave cabins made of Cypress. The plantation had its own sawmill, sugar house, cotton gin, blacksmith shop, commissary, and a kiln for brick manufacture.

The town was named for John Sweeny.

The original town stood in a forest of hardwoods with soil twenty feet deep. Sweeny was briefly called Adamston when the St. Louis, Brownsville and Mexico Railway reached the area in 1905 and laid a side track lined with gardens to the community. A post office was established in 1895, closed in 1897, and was reestablished in 1909 as Sweeny. Sweeny's cotton gin and general store were built by 1908, a school was organized in 1911 with eleven students, and church services were held in 1912, when a Civic Club was founded to promote civic and social improvements. Around 1910 the R. D. McDonald Bernard River Land Development Company, which later gave a plot of land to each church denomination, purchased acreage in the area, cut it into lots, and sold it.

Burton D. Hurd platted the townsite in 1911. His Burton D. Hurd Industrial Land Company promoted ten-acre suburban garden farms in the area with the slogan, "Soil Richer Than the Valley of the River Nile" to prospective settlers.

By 1914 the community had a hotel, a flour mill, three general stores, a cotton gin, a gristmill, a sawmill, and a population of 200. In the 1920s Sweeny shipped cotton, vegetables, live-oak parts for ships, and, for a time, bullfrogs raised by area farmers. In 1918 it had a brick factory and an orange orchard. Sweeny had an independent school system by 1912; school enrollment reached 236 by 1927, and by 1937 the community had three black schools and an all-grade white school with six teachers. The Ku Klux Klan operated briefly and held one cross-burning in the community.

In 1934, oil was discovered in Old Ocean, creating development which made Sweeny prosper. In 1942, a government carbon black plant was built which was taken over by Phillips Petroleum, which developed the facilities into a refinery, natural gas liquids center, and petrochemicals complex with pipelines to markets in the eastern United States. In 2000, Phillips Petroleum merged with Conoco Inc. to form ConocoPhillips. Sweeny's population in the latter 20th century has fluctuated from 3,087 to 3,699. 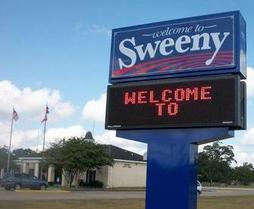 1833: John Sweeny settles just outside what will become a town bearing his name.
1905: Railroad reaches town.
1912: Independent school system formed.
1914: Population reaches 200.
1934: Old ocean oilfield discovered.
1945: City incorporated.
1966: Won state in football.
1967: City park built.
1988: Community Center / Library completed.
2002: Tropical Storm Fay dumps over 20 inches (510 mm) of rain in Sweeny, flooding most roads.
2004: Sweeny has Christmas snow, with almost 10 inches reported in some places.
2007: Running out of space to grow, Sweeny plans to start annexing land.
2008: Sweeny's mayoral race is decided by a single vote. Rodney Weems beat Phyllis Kittinger for the title. In the November general election, voters approved the sale of alcohol in Sweeny for the first time. Southeast Texas receives an early Christmas present, another snow fall
2010: Hurricane Alex made landfall in Mexico. Rain bands from Alex dumped more than a foot of rain over two days, flooding houses twice within 24 hours.
2011: FM 524 bypass from State Highway 35 to County Road 359 in Old Ocean is completed, giving travelers from the west a route around the ConocoPhillips refinery.
Early 2012: Sweeny is once again flooded by heavy downpours, with several roads closed and water in some residences, although work is being done to alleviate the constant flood problems.

Schools are part of the Sweeny Independent School District which serves the city of Sweeny as well as outlying areas including Churchill, Shady Acres, River's End and Old Ocean. The high school's mascot is the Bulldog.

Schools in the district are Sweeny Elementary (K–5), Sweeny Junior High (6–8) and Sweeny High School (9–12), which is a 3A school. In 2007, construction began on the high school to renovate the current building. With growing security concerns, the Board of Trustees approved the renovation of the school, because most of the campus was open to the outside. The new school will have limited outside access. Classes met in the new on building December 1, 2008. 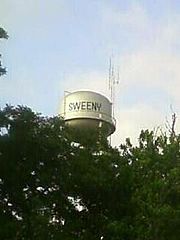 All content from Kiddle encyclopedia articles (including the article images and facts) can be freely used under Attribution-ShareAlike license, unless stated otherwise. Cite this article:
Sweeny, Texas Facts for Kids. Kiddle Encyclopedia.