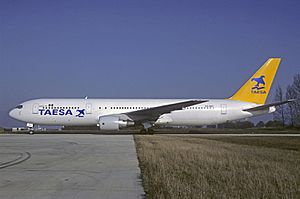 TAESA was a Mexican low-cost carrier. It began on April 27, 1988. It was one of the first low-cost airlines in Mexico. At times, it became Mexico's 3rd largest airline, after Aeroméxico and Mexicana de Aviacion. On November 9, 1999, a TAESA plane crashed. It was flying from Uruapan to Mexico City International Airport. The crash killed 18 people. That crash and other factors led to TAESA declaring bankruptcy in February 2000.

All content from Kiddle encyclopedia articles (including the article images and facts) can be freely used under Attribution-ShareAlike license, unless stated otherwise. Cite this article:
TAESA Facts for Kids. Kiddle Encyclopedia.