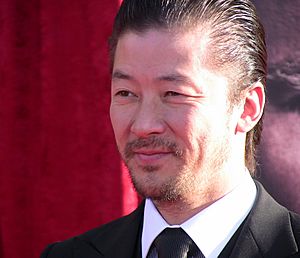 Tadanobu Asano is a Japanese actor, musician, painter. He was born in Kanagawa on November 27 in 1973. At the age of 16, he played a role in the Japanese famous TV show Kinpachi Sensei in 1988. It was the start of his career as an actor. He is also active on social media and has 255,000 followers on Instagram.

His film debut was Bataashi Kingyo in 1990. And then, he acted in various roles and appeared in many movies, and thus he has built his career as an actor. His performance is highly appreciated by people not only in Japan but also in overseas countries. He received film awards, for example, the Upstream Prize for Best Actor at the 2003 Venice Film Festival for his role in Last Life in the Universe and the award for Best Actor at the 36th Moscow International Film Festival for his role in My Man in 2014. He has also appeared in Hollywood's movies. His first appearance in Hollywood's movie was a marvel movie “Thor” in 2011. In addition to that, he acted on Battleship in 2012, Silence that was directed by Martin Scorsese in 2015, Midway in 2019.

In addition to work as an actor, Asano is also known as a musician. He is a band member of SODA!, which formed in 2013, and he is the vocalist. He paints pictures and posts it frequently on instagram and twitter. In 2018, he held a solo exhibition that introduced 700 of his paintings. And also, he published three books of his paintings “error” in 1999, “BUNCH” in 2003 and “Everlasting Fountain” in 2018. He draws with acrylic paints, crayons and pencils, and draws on the papers and even on the back of the envelopes. His paintings are drawn in many different ways. These look like scribble art, comic books, abstract art and so on.

He often posts his outfits on Instaglam and WEAR, which is an app that people can watch and post fashion photography. His outfits in photos are almost all casual style, but he coordinates many patterns and colors well-balanced. Moreover, he has his own fashion brand. He is creating clothes that he wants to wear. He changed his brand name to "TADANOBU ASANO" from "JEAN DIADEM."

All content from Kiddle encyclopedia articles (including the article images and facts) can be freely used under Attribution-ShareAlike license, unless stated otherwise. Cite this article:
Tadanobu Asano Facts for Kids. Kiddle Encyclopedia.