Tallapoosa /tæləˈpuːsə/ is a city in Haralson County, Georgia, United States. The population was 3,170 at the 2010 census.

The Scientific American of May 31, 1890, featured a glowing cover story on Tallapoosa, with many illustrations.

There were 1,187 households out of which 28.3% had children under the age of 18 living with them, 46.3% were married couples living together, 14.9% had a female householder with no husband present, and 35.6% were non-families. 32.3% of all households were made up of individuals and 16.4% had someone living alone who was 65 years of age or older. The average household size was 2.34 and the average family size was 2.95. 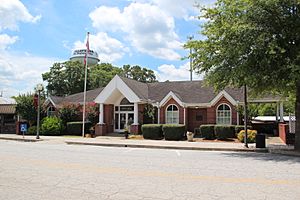 Tallapoosa is home to recreational and cultural opportunities for residents and visitors.

The Tallapoosa Historical Society keeps the unique multiregional history of the city alive through publications, fairs, performances and meetings.

The following are listed by the city:."

West Georgia Museum of Tallapoosa - An authentic museum created by local residents that includes re-creations of Tallapoosa's businesses and many artifacts from the Indian Era.

Historic District Walking Tour - View the beauty of yesterday's architecture on this in-city pedestrian trail that begins behind the Tallapoosa library.

Tallapoosa is mentioned in Johnny Cash's song "I've Been Everywhere." It is also the setting for the Ray Stevens song "Vacation Bible School," which appears on the "I Have Returned" Album.

Tallapoosa has an application available from a mobile Browser Tallapoosa, GA - Mobile App.

Tallapoosa hosts an annual New Year's celebration referred to as the Possum Drop.

All content from Kiddle encyclopedia articles (including the article images and facts) can be freely used under Attribution-ShareAlike license, unless stated otherwise. Cite this article:
Tallapoosa, Georgia Facts for Kids. Kiddle Encyclopedia.