Cedartown is a city in Polk County, Georgia, United States. As of the 2010 census, the city had a population of 9,750. The city is the county seat of Polk County. Cedartown is the principal city of and is included in the Cedartown, Georgia Micropolitan Statistical Area, which is included in the Atlanta-Sandy Springs-Gainesville, Georgia-Alabama (part) Combined Statistical Area.

Cherokee and Creek Native Americans first inhabited the area known as Cedar Valley. The Cherokee people had established a village there in the 1830s after the Native Americans were forced out on the Trail of Tears.

The most famous of these settlers was Asa Prior. According to local legend, the water rights to Big Spring were won for the white settlers by a local white boy in a footrace with a Cherokee youth. Some versions of the legend differ, saying that the rights to the spring were won by the Cherokee people from the Creek people in a ball game. "Big Strickland" became "Cedar Town" when Prior deeded ten acres of adjacent land to the newly chartered city in 1852. Big Strickland was the original county seat and Cedar Town became the county seat later.

During the Civil War, Cedar Town was abandoned by most of its citizens when Union troops encroached. The city was burnt to the ground by the Union forces of General Hugh Judson Kilpatrick in 1865, leaving only one mill standing on the outskirts of town.

In 1867, the town was re-chartered by the state of Georgia as Cedartown. An influx of industrial business bolstered its largely cotton-based economy, with Goodyear and other fabric mills and iron works appearing in or near what is now the Cedartown Industrial Park on the west side of town.

The Goodyear Tire and Rubber Company built a large textile mill operation in Cedartown, and also built a large residential section of town for mill workers, now known as the Goodyear Village.

In recent times, the Georgia Rails to Trails project has converted much of the former Seaboard Air Line into the Silver Comet Trail, a federal and state funded park that connects many cities in northwest Georgia.

Cedartown's Main Street is listed in the National Register of Historic Places in recognition of its 1890s architecture. During the 1970s, many structures were demolished, including train stations, churches, and a high school, and a theater on Main Street.

Sites on the National Register of Historic Places:

There were 3,370 households out of which 29.4% had children under the age of 18 living with them, 43.1% were married couples living together, 17.6% had a female householder with no husband present, and 33.6% were non-families. 29.5% of all households were made up of individuals and 15.2% had someone living alone who was 65 years of age or older. The average household size was 2.65 and the average family size was 3.18. 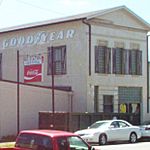 Though the Cedartown Bus Station sign still hangs in downtown, the station was closed years ago.

With the shift away from rural living patterns and toward interstate highway satellite suburban living patterns, combined with the general U.S. shift away from agricultural and industrial economies, Cedartown is left in an awkward position. The city suffered a major economic blow when the Goodyear Tire and Rubber Company closed its local mill operations. For its employment, Cedartown mainly relies on the prospect of large corporate operation centers such as Cingular Wireless, manufacturing operations like that of The HON Company, and the retail operations of Wal-Mart.

The Hon Company is Cedartown's largest for-profit employer with over 800 employees. With a recently announced expansion, this number will grow in the near future. Cedartown is also home to an AT&T (formerly Cingular) technical support facility for the company's wireless customers.

The Rome Plow Company, formerly located in Rome, Georgia, is headquartered in Cedartown. It manufactured the Rome plows used as jungle-clearing vehicles during the Vietnam War and produced agricultural vehicles until it shut down in late 2009. Rome Plow has since been purchased and re-opened. The new facility recently underwent an expansion.

Access to nearby major cities such as Atlanta, Birmingham, and Chattanooga is easier with the expansion of U.S. Highway 27, which is four lanes from I-20 into Cedartown. The four lane expansion will soon have U.S. 27 fourlaned all the way north to the Tennessee state line.

Passenger rail service to Cedartown was abandoned in the 1970s, leading to the destruction of the historic Cedartown Depot train station. The city built a replica of the historic depot which now serves as the Welcome Center and the trailhead to the Silver Comet Trail.

The city does offer bus service and has frequent routes to neighboring Rockmart. The nearest stop on the Greyhound line is a full service station in Rome, Georgia, 20 miles north.

All content from Kiddle encyclopedia articles (including the article images and facts) can be freely used under Attribution-ShareAlike license, unless stated otherwise. Cite this article:
Cedartown, Georgia Facts for Kids. Kiddle Encyclopedia.