Cave Spring is a city in Floyd County, Georgia, United States. It is located 16 miles (26 km) southwest of Rome, the county seat. The population of Cave Spring was 1,200 at the 2010 census, up from 975 at the 2000 census. It is part of the Rome, Georgia Metropolitan Statistical Area.

The town was named after the cave and water spring located in Rolater Park. The cave has impressive stalagmites and the legendary "Devil's Stool" formation. The spring water has won awards for purity and taste. Many visitors bring jugs to fill at the spring and take home for drinking. 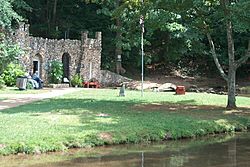 Rolater Park is known for its spring water and pre-Civil War cave.

Cave Spring is well known for the natural wonders of the cave and spring site where indigenous peoples came to the area (both Cherokee and the earlier Mississippian culture). Legend has it that tribal meetings and games used to be held at the site. In 1839, Cave Spring was formed as a small town, founded by Baptists who were among the early settlers. The cave and spring site is now part of Rolater Park, formerly used by educational institutions such as Cave Spring Manual Labor School (renamed Hearn Academy) and others including Georgia School for the Deaf. During the Atlanta Campaign of the Civil War in 1864, both Confederate and Union troops came to Cave Spring for hospitalization and rest.

The spring flows into a sparkling pond from Rolater Park and then into a 1.5-acre (6,100 m2) swimming pool shaped like the state of Georgia. The pool is constructed out of stones.

Cave Spring has historic homes and buildings from its early years, such as the 1867 Presbyterian Church, 1880 train depot, and 19th century hotels and boarding houses.

There were 404 households out of which 28.2% had children under the age of 18 living with them, 52.0% were married couples living together, 14.9% had a female householder with no husband present, and 30.2% were non-families. 29.5% of all households were made up of individuals and 15.3% had someone living alone who was 65 years of age or older. The average household size was 2.36 and the average family size was 2.89. 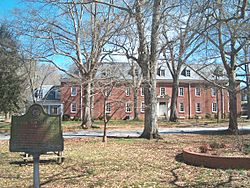 The building of the Georgia School for the Deaf, Fannin Hall, was built in 1846. It was later used as a field hospital for Civil War soldiers.

Georgia School for the Deaf

Cave Spring is the home of the Georgia School for the Deaf, established in 1846. It is a state-funded residential school operating under the auspices of the Office of Special Services of the Georgia State Department of Education and the Georgia State Board of Education. It aims to ensure that appropriate educational programs are available for hearing impaired and multi-handicapped hearing impaired students residing in Georgia. GSD was once a field hospital for both Confederate and Union troops during the Civil War.

All content from Kiddle encyclopedia articles (including the article images and facts) can be freely used under Attribution-ShareAlike license, unless stated otherwise. Cite this article:
Cave Spring, Georgia Facts for Kids. Kiddle Encyclopedia.