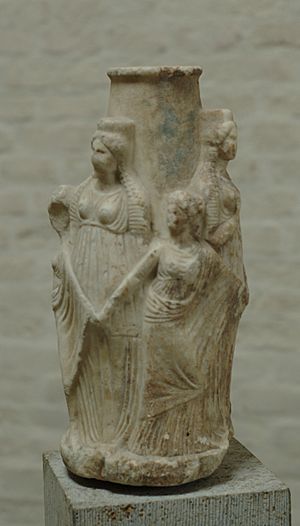 The underworld is the place in Greek mythology where people go when they die. It is also called Hades after the god who rules there. Its gates are guarded by the three-headed dog, Cerberus. There are five places you end up, one is Tartarus. Not all people though end up in there. People that lived normal lives would go to The Fields of Asphodel, heroes would go to The Fields of Elysium and very bad people would go the Fields of Punishment. If you were put into Elysium, you could choose to be reborn and if you made it to Elysium three times then you went to the Isle of the Blessed. This was like the ultimate heaven. There are several special places/areas:

All content from Kiddle encyclopedia articles (including the article images and facts) can be freely used under Attribution-ShareAlike license, unless stated otherwise. Cite this article:
Greek underworld Facts for Kids. Kiddle Encyclopedia.