The Tasmanian Seafarers' Memorial is a public memorial structure located at Triabunna, Tasmania which jointly commemorates all Tasmanians whose lives were lost at sea, along with the lives of all seafarers of any origin who lost their lives in Tasmanian waters. The memorial comprises individual commemorative plaques for each maritime tragedy involving recreational, commercial, mercantile or naval vessels and personnel lost since 1803. As-at February 2017, the memorial contained plaques for 116 tragic events involving the loss of over 1450 lives.

The Seafarers' Memorial at Triabunna is an acknowledged Australian maritime memorial site, and has become a popular visiting and reflection place for many tourists travelling on Tasmania's eastern coast. 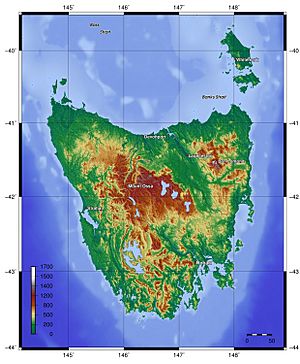 Island of Tasmania, located below the Australian mainland between latitudes 40°S and 44°S

Located to the south of the Australian mainland and fully exposed to the Roaring Forties winds of the Southern Hemisphere, the island state of Tasmania has a long history of seafaring, and an even longer history of seaborne tragedy. Ships have foundered off Tasmania's 2,500 kilometres (1,600 mi) of coastline even before permanent settlement began in 1803, and over 1000 vessels are known to have been lost in Tasmanian waters since records began. In addition, Tasmanians have served or sailed on vessels across the globe since those same times, both in peacetime and in war, and many have perished in seafaring tragedies, often never being recovered. It is to all these vessels and seafarers that the Tasmanian Seafarers' Memorial is dedicated.

The stated purposes of the Memorial are:

The Memorial has its origins with the loss of a young fisherman of Triabunna, Gavin Batchelor, who drowned off Maria Island in 1995. Representations were made to the local Glamorgan Spring Bay Council, who in 1996 established a permanent Tasmanian Seafarers' Memorial Committee to oversee the construction and ongoing management of a memorial suitable to be dedicated to all Tasmanian seafarers. Financial support has been from local, state and federal levels of government as well as individual donations.

The official dedication of the Memorial occurred on Sunday 26 October 1997, which was conducted by the Mayor of Glamorgan Spring Bay Council, Cr E. A. (Bill) Bailey, and addressed by members of the Australian and Tasmanian governments, through Senator Eric Abetz and the Hon. Denise Swan respectively. The formal dedication quoted at the initial and all subsequent ceremonies at the Memorial is:

"The memory of those whom we have lost – We share. For those who grieve such a loss – We care."

Among the over 100 maritime tragedies commemorated by plaques at the Tasmanian Seafarers' Memorial are many which represent events well-known to most Tasmanians and many mainland Australians. These notable tragedies include:

Ichthys or "fish" symbol of the early Christian church

The Memorial is a simple, almost unassuming structure designed to present a multitude of individual plaques for quiet viewing and contemplation. Sited in a park on Esplanade West, Triabunna and overlooking the local port of Spring Bay, the structure comprises low, curved masonry walls forming a fish shape in plan, upon the capping of which are set the commemorative plaques. Openings to each side allow viewers into the centre of the Memorial, where a masonry boat-like plinth supports a large vertical anchor cross and the Merchant Naval plaque. A separate sandstone bollard to one side carries the main Naval plaque, while ahead and on the front quarters of the Memorial stand ships masts with halyards and lights, and a flagpole.

Open space is provided around the main structure to allow for the conducting of significant ceremonies and services, a number of which occur each year. The design combines both maritime and spiritual influences by incorporating a plan layout which reflects the early Christian ichthys or "fish" symbol, and was undertaken by local Tasmanians Mrs K. M. Fergusson and J. G. Castle.

Commencing in 1998, the Tasmanian Seafarers Memorial has conducted an annual service of dedication, usually held on the third Sunday in October. This timing allows the service to include the annual Blessing of the Fleet for the local fishing industry.

The services have frequently been attended by dignitaries, servicemen and survivors including his Hon. the Governor of Tasmania; Federal and State politicians; the Chief Justice of the Tasmanian Supreme Court; and senior officers of the Royal Australian Navy. 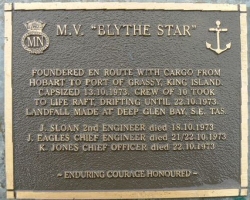 Individual memorial plaques are installed at the Tasmanian Seafarers' Memorial to commemorate the loss of over 100 individual vessels, and which resulted in the deaths of over 1400 persons. Additional plaques have been mounted for events significant to the local community and Tasmania, such as the tragedies at Oyster Bay and Spring Bay, the 1998 Sydney to Hobart yacht race, and the drowning of Tasmanian prisoners of war during World War II. A third group of plaques comprise the Spring Bay Professional Fishermen's Memorial. Other significant memorials in the complex include the Tasmanian Merchant Navy Memorial and the Tasmanian Naval Seafarers' Memorial.

All content from Kiddle encyclopedia articles (including the article images and facts) can be freely used under Attribution-ShareAlike license, unless stated otherwise. Cite this article:
Tasmanian Seafarers Memorial Facts for Kids. Kiddle Encyclopedia.