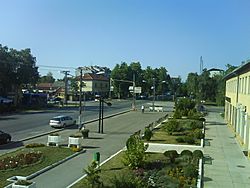 Temerin is located in Panonian plain, about 20 km north of Novi Sad, the seat of the district. It is first mentioned in 1332 in the receipt by the pope Then Temerin was part of Kingdom of Hungary. Ottomans conquered it 1526, after Battle of Mohacz. Temerin stayed in Ottoman possession until Great Turkish War at the end of 17th century, when it became part of Austrian Empire. After World War I Temerin became part of Yugoslavian state.

All content from Kiddle encyclopedia articles (including the article images and facts) can be freely used under Attribution-ShareAlike license, unless stated otherwise. Cite this article:
Temerin Facts for Kids. Kiddle Encyclopedia.