Temple of Hera at Olympia facts for kids 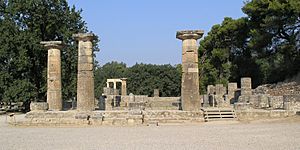 The Temple of Hera (Heraion) is a temple dedicated to Hera, the Greek goddess of marriage. She was the wife of Zeus, the greatest of the Greek gods. The temple was built about 600 BC at Olympia, Greece. It is one of the oldest temples in Greece. It measures 50 meters by 18.75 meters. It was about 7.80 meters high. It had six Doric columns at either end and sixteen Doric columns on each side. The columns were originally made of wood, but were replaced with limestone at different times. The temple was destroyed by an earthquake in the early 4th century AD. It was not repaired.

A statue of Hera was seated on a throne at the eastern end of the cella. A stone head that may be Hera survives. Next to Hera stood a statue of Zeus dressed as a warrior. The famous statue of Hermes and the Infant Dionysos of Praxiteles was kept in the temple. At the western end of the temple was kept the table that held the wreaths for the victors of the Olympic Games. Other valuable items were also kept at the western end.

Winners of the ancient all-female Heraia had the right to dedicate their statues to the temple. It was at these footraces that the statue of Hera was dressed every four years in a robe made by the women of Elis. The modern Olympic Flame is lit at the Altar of Hera which stands to the east of the temple. The German Archaeological Institute restored some of the columns in the late 20th century as well as the great circular akroterion of the temple. The akroterion is displayed in the Olympia museum.

All content from Kiddle encyclopedia articles (including the article images and facts) can be freely used under Attribution-ShareAlike license, unless stated otherwise. Cite this article:
Temple of Hera at Olympia Facts for Kids. Kiddle Encyclopedia.