Terry Edward Branstad (born November 17, 1946) is an American politician. He is the United States Ambassador to China since May 24, 2017. He was the 42nd Governor of Iowa from in January 14, 2011 until his resignation on May 24, 2017. Branstad was the 39th governor of Iowa from 1983 to 1999 and President of Des Moines University from 2003 to 2009. He is a member of the Republican Party and was the longest-serving governor in Iowa or American history.

In 2010, he won a three-way primary election to run as the Republican candidate for governor. He ran against incumbent Governor Chet Culver, a Democrat, and four third party candidates in the November 2, 2010 general election. He won the general election in November, defeating Culver by 52.9% to 43.1%.

Branstad started the 2010 race with a lead in both the primary and general elections. He won the Republican primary with 50.4% of the vote, 9.5% ahead of the next candidate.

Branstad's family were Norwegian-American Lutheran farmers who lived in Leland, Iowa. Branstad graduated from the University of Iowa and earned a law degree from Drake University Law School. He served in the United States Army from 1969 to 1971 and earned the Army Commendation Medal for meritorious service. In 1989, he was named an honorary member of Alpha Gamma Rho Fraternity at Iowa State University.

Branstad served three terms in the Iowa House of Representatives from 1973 to 1979 and served as the 41st Lieutenant Governor of Iowa from 1979 to 1983, when he was elected Governor of Iowa. 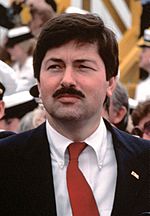 After Branstad's term as governor ended in 1999, he founded Branstad and Associates, LLC and was also a partner in the firm of Kaufman, Pattee, Branstad & Miller, and a financial advisor for Robert W. Baird and Co.

In 2001, Branstad was appointed by President George W. Bush to chair the President's Commission for Excellence in Special Education. This group's goal was to make a plan to improve the educational performance of students with disabilities. After finishing that work with the commission in 2003, he was asked to serve as a member of the National Advisory Council for Positive Action for Teen Health, or PATH. The Council's goal is to detect adolescent mental illness.

Branstad is or was on the boards of the Conmed Health Management Inc, American Future Fund, Iowa Health System, Liberty Bank, the American Institute of Certified Public Accountants, and Living History Farms.

On December 8, 2016, Branstad accepted President-elect Donald Trump's nomination of him for the post of United States Ambassador to China (PRC).

Branstad was confirmed by the United States Senate on a 83-12 vote on May 22, 2017, and was succeeded as Governor of Iowa by Lieutenant Governor Kim Reynolds once he resigned to take up the ambassadorship.

All content from Kiddle encyclopedia articles (including the article images and facts) can be freely used under Attribution-ShareAlike license, unless stated otherwise. Cite this article:
Terry Branstad Facts for Kids. Kiddle Encyclopedia.