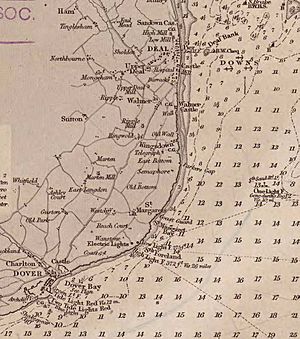 1848 chart showing the position of the Downs off the coast of Kent. NB, depths are in fathoms.

The Downs is a roadstead (area of sheltered, favourable sea) in the southern North Sea near the English Channel off the east Kent coast, between the North and the South Foreland in southern England. In 1639 the Battle of the Downs took place here, when the Dutch navy destroyed a Spanish fleet which had sought refuge in neutral English waters. From the Elizabethan era onwards, the presence of the Downs helped to make Deal one of the premier ports in England, and in the 19th century, it was equipped with its own telegraph and timeball tower to enable ships to set their marine chronometers. 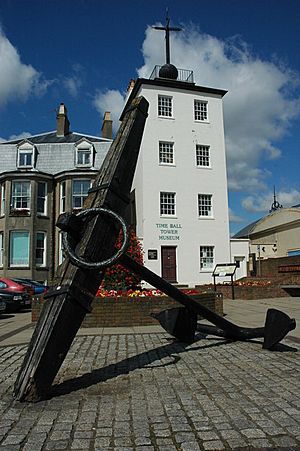 The anchorage has depths down to 12 fathoms (22 m). Even during southerly gales some shelter was afforded, though under this condition wrecks were not infrequent. Storms from any direction could also drive ships onto the shore or onto the sands, which—in spite of providing the sheltered water—were constantly shifting, and not always adequately marked. The Downs served in the age of sail as a permanent base for warships patrolling the North Sea and a gathering point for refitted or newly built ships coming out of Chatham Dockyard, such as HMS Bellerophon, and formed a safe anchorage during heavy weather, protected on the east by the Goodwin Sands and on the north and west by the coast. The Downs also lie between the Strait of Dover and the Thames Estuary, so both merchant ships awaiting an easterly wind to take them into the English Channel and those going up to London gathered there, often for quite long periods. According to the Deal Maritime Museum and other sources, there are records of as many as 800 sailing ships at anchor at one time.

During the First World War, German destroyers made frequent raids against ships anchored in the Downs. Royal Navy vessels of the Dover Patrol were often tasked with guarding the area at night to discourage or counter attacks.

In the present day, with the English Channel still the busiest shipping lane in the world, cross-Channel ferries and other ships still seek shelter here.

All content from Kiddle encyclopedia articles (including the article images and facts) can be freely used under Attribution-ShareAlike license, unless stated otherwise. Cite this article:
The Downs (ship anchorage) Facts for Kids. Kiddle Encyclopedia.