Kids Encyclopedia Facts
This page is about protected area in South Australia. For the associated mountain, see The Dutchmans Stern.

The Dutchmans Stern Conservation Park is a protected area located in South Australia about 5 kilometres (3.1 miles) north-west of the town of Quorn in the Flinders Ranges. It includes a mountain known as The Dutchmans Stern from which its name is derived. 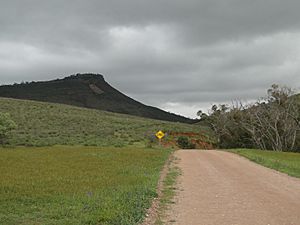 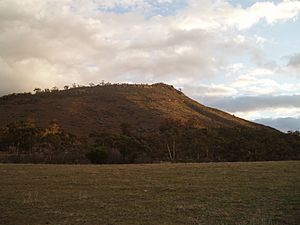 The conservation park was proclaimed under the National Parks and Wildlife Act 1972 in 1987 for:

the protection of its geological features, scenic values and native fauna and flora. The diversity of landforms and habitats in the reserve are significant factors contributing to its conservation value, particularly as much of the surrounding land has been used for grazing for over 100 years.

As of 1999, it was considered that the Nukunu Aboriginal people are the traditional owners with the possibility of an overlap of jurisdiction with "the Adnyamathanha to the north and with the Parnkalla to the west." The land was the subject of a pastoral lease from the 1880s until acquisition for conservation purposes in 1985. Land within the conservation park has been used as a water catchment with Stoney Creek on the eastern side being "diverted to an engineered channel" that goes to the "Mount Arden dam to supplement the Quorn water supply" while on the western side, run-off "drains into South Creek from where it is piped to serve properties" located to the west. During the 1960s, exploration was carried out in search of mineral deposits which included works such as the construction of the Dutchman Valley track on the western side of the conservation park.

As of 2010, services for visitors include accommodation, camping and a network of walking trails.

All content from Kiddle encyclopedia articles (including the article images and facts) can be freely used under Attribution-ShareAlike license, unless stated otherwise. Cite this article:
The Dutchmans Stern Conservation Park Facts for Kids. Kiddle Encyclopedia.