The Flying House, known in Japan as Tondera Hausu no Daibōken (トンデラハウスの大冒険, Adventures of the Flying House), is an anime television series produced by Tatsunoko Productions broadcast between April 1982 and March 1983 on TV Tokyo, and distributed by the Christian Broadcasting Network in the United States. In 2010, the Christian Broadcasting Network made the 52 episodes available for viewing online.

At the same time, CBN and Tatsunoko also produced a related series, Superbook.

In the Philippines, reruns of the show were broadcast on GMA Network in 1992 and on ABS-CBN in 2015. The episodes are currently broadcast on Pop Life TV via digital free-to-air television BEAM TV.

It was Also Broadcast on the Australian Christian Channel in Australia. 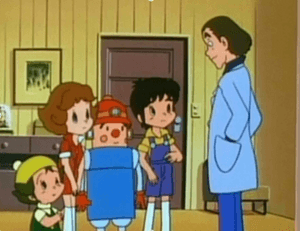 Professor Bumble, S.I.R. and the other child characters of The Flying House

The series begins in the middle of a game of hide and seek, as a young boy named Justin Casey (Gen Adachi) finishes counting and begins searching for his friends Angela "Angie" Roberts and her little brother Corbin "Corky" Roberts (Kanna and Tsukubo Natsuyama). As he searches for Angie and Corky in a wooded area, a thunderstorm suddenly appears. Justin manages to sneak up on the two before the rain starts pouring, forcing them to run for cover. They eventually find a spacecraft type house in the wooded area, previously unseen according to Justin. At first glance it appears that nobody is home, until they discover a clown battery type android named Solar Ion Robot (Kadenchin), or S.I.R. for short. They soon meet the owner of the house, Professor Humphrey Bumble (Dr. Tokio Taimu), who introduces the children to his greatest creation, a half rocket, half house one of a kind time machine namely The Flying House. Humphrey's attempt at recreating Benjamin Franklin's famous lightning experiment with the use of a bat looking kite flying outside the house to get the machine working only leads to a temporary change in S.I.R.'s personality from nice to mean and goes berserk before sending The Flying House on course for the past. Little did they know that Justin, Angie, Corky, and S.I.R. truly realize how long the journey back home will take due to Humphrey's misguidance and errors in time travel, but in the meantime they witness and participate (with little or no consequences) in numerous events in the Bible's New Testament, from John the Baptist's birth to the rise of the Apostle Paul.

Eventually, they make it home exactly the same way they traveled into the past in the first place. S.I.R. gets a knock in the head which, again, makes him go from nice to mean and go berserk and he attacks The Flying House. Ironically, S.I.R.'s berserkiness fixes it in such a way that it finally sends the whole crew back to their own time period, and the show ends, with S.I.R. changed back from mean to nice by the end of the trip.

The main cast of the series includes (English-language voice actors in parentheses):

The Flying House was available on VHS by Tyndale; all 52 episodes were released over 26 VHS cassettes. A DVD volume of The Flying House was released by Vision Video in 2006, featuring the first four episodes. In 2010, the Christian Broadcasting Network made the 52 episodes available for viewing online. The series also airs on the Trinity Broadcasting Network (TBN) and its children's subchannel Smile.

All content from Kiddle encyclopedia articles (including the article images and facts) can be freely used under Attribution-ShareAlike license, unless stated otherwise. Cite this article:
The Flying House (TV series) Facts for Kids. Kiddle Encyclopedia.