The French Laundry facts for kids

Kids Encyclopedia Facts
This page is about the restaurant. For Californian laundries operated by the French, see French laundries of California. 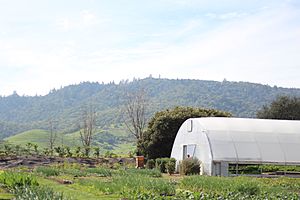 The building was built as a saloon in the 1900s by a Scottish stonesman for Pierre Guillaume.

When a law was passed in 1906 prohibiting sale of alcohol within a mile (1600 m) of a veteran's home, Guillaume sold the building.

In the 1920s, the building was owned by John Lande who used it as a French steam laundry, which is the origin of the restaurant's name.

In 1978, Don Schmitt, the mayor of Yountville, renovated the building into a restaurant. He and his wife Sally Schmitt owned the French Laundry for much of the 1980s and early 1990s.

In 1994, Keller bought the restaurant.

In 2004, the restaurant installed a geothermal heating and air conditioning system.

In July 2014, the Napa Valley restaurant celebrated its 20th anniversary with a six-hour feast for friends, locals, and luminaries and temporarily closed for renovations before the end of the year.

In December 2014, while being temporarily closed for renovations, The French Laundry wine cellar was robbed of an estimated $500,000 of wine. Most of the wine was subsequently recovered.

On April 7, 2015, the restaurant reopened following demolition of a number of buildings on the site. During the remainder of the renovation project, the staff worked out of a temporary kitchen.

In November 2020, amid the COVID-19 pandemic, California Governor Gavin Newsom was observed attending a birthday party for a lobbyist and friend at The French Laundry, where more than three other families were in attendance, despite his administration issuing guidelines limiting such gatherings to only three households. Neighboring diners at the restaurant said Newsom's party was so loud that restaurant staff closed off their outdoor dining space with sliding glass doors. Newsom's office initially defended the celebration and said dining recommendations were separate from state guidelines. Newsom later apologized for attending the celebration. The incident was said to have severely damaged Newsom's image and credibility amidst the public health crisis.

During the COVID-19 pandemic, The French Laundry has opened and closed a few times. They are currently closed. 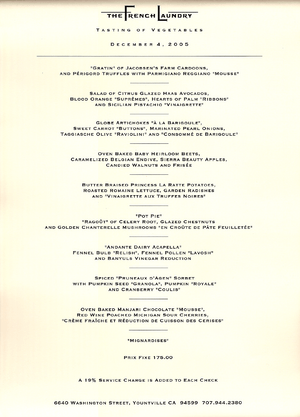 This vegetable tasting menu was one of three menus available for Sunday December 4, 2005

Every day, the French Laundry serves two different nine-course tasting menus, one the Chef's Tasting Menu and the other the Tasting of Vegetables, which is vegetarian. During the winter holiday season, Thanksgiving, Halloween, and other holidays, the restaurant may offer special dishes. Both menus are US$355 per person, including gratuity for the base meal, although not including additional supplements such as caviar and truffles.

The food is mainly French with contemporary American influences, giving rise to such unique specialties as smoked salmon cornets, which were inspired by a trip to Baskin-Robbins.

In February 2004, Thomas Keller opened the East Coast version of his Yountville restaurant, which he named Per Se. The kitchens of both restaurants are connected via a real-time video feed on a television screen.

Thomas Keller opened a pop-up restaurant in the Silverado Resort & Spa during the renovation of The French Laundry. The restaurant, which serves American classics, is called Ad Lib. This is not the first pop-up restaurant that Keller has helmed, previously popping up at the Mandarin Oriental in Hong Kong and at Harrod's in London.

Since 2006, it has been awarded three stars in the Michelin Guide to San Francisco. It received a favorable review in The New York Times and was called "the best restaurant in the world, period" in 2005 by Anthony Bourdain.

Since 2007, the restaurant has been the recipient of the Wine Spectator Grand Award.

All content from Kiddle encyclopedia articles (including the article images and facts) can be freely used under Attribution-ShareAlike license, unless stated otherwise. Cite this article:
The French Laundry Facts for Kids. Kiddle Encyclopedia.