The Good Huswifes Jewell is an English cookery book by the cookery and housekeeping writer Thomas Dawson, first published in 1585. It includes recipes for medicines as well as food. To the spices found in Medieval English cooking, the book adds herbs, especially parsley and thyme. Sugar is used in many of the dishes, along with now-unfamiliar ingredients like violets and rosewater.

The book includes recipes still current, such as pancakes, haggis, and salad of leaves and flowers with vinaigrette sauce, as well as some not often made, such as mortis, a sweet chicken pâté. Some dishes have familiar names, such as trifle, but different ingredients from those used today.

The Jewell is the first English cookery book to give a recipe for sweet potatoes.

The Elizabethan age represented the period of transition from Medieval to modern. Cookery was changing as trade brought new ingredients, and fashion favoured new styles of cooking, with, for example, locally grown herbs as well as imported spices. Cooking came to be seen as a subject in its own right, rather than being part of medicine or books of "secrets". Little is known of the book's author, Thomas Dawson, beyond the bare fact that he published several books on cooking including also his 1620 Booke of cookerie. Such books were becoming available to a wider audience than the aristocratic households of the Middle Ages, hence the "huswife" of Dawson's title.

The Good Huswifes Jewell gives recipes for making fruit tarts using fruits as varied as apple, peach, cherry, damson, pear, and mulberry. For stuffing for meat and poultry, or as Dawson says "to farse all things", he recommends using the herbs thyme, hyssop, and parsley, mixed with egg yolk, white bread, raisins or barberries, and spices including cloves, mace, cinnamon and ginger, all in the same dish. A sauce for pork was made with white wine, broth, nutmeg, and the herbs rosemary, bay, thyme, and marjoram.

Familiar recipes include pancakes, which were made with cream, egg yolks, flour, and a little ale; the cook was directed "let the fire be verie soft, and when the one side is baked, then turn the other, and bake them as dry as ye can without burning." Blancmange appears as "Blewmanger", made of cream, eggs, sugar and rosewater.

The recipes are written as goals, like "To make a Tarte of Spinadge", with instructions to achieve the goal. Quantities are given, if at all, only in passing, either with vague phrases like "a good handful of persely and a few sweet hearbs", or as "the yolks of 4 hard egges". Cooking times are given only occasionally, as "let them seeth a quantitye of an houre". Directions as to the fire are given where necessary, as "boyle it in a chafing dish of coales" or "with a fyre of Wood beate it the space of two houres".

The recipe for a salad with a vinaigrette dressing runs as follows (from the 1596 edition):

To Make a Sallet of All Kinde of Hearbes

Take your hearbes and picke them very fine into faire water, and picke your flowers by themselues, and washe them al cleane, and swing them in a strainer, and when you put them into a dish, mingle them with Cowcumbers or Lemmons payred and sliced, and scrape Suger, and put in vineger and Oyle, and throwe the flowers on the toppe of the sallet, and of every sorte of the aforesaide things and garnish the dish about with the foresaide things, and harde Egges boyled and laide about the dish and upon the sallet.

This recipe is taken up by the National Trust, which calls it "Stourhead herb and flower salad."

The 1596 edition is structured as follows:

The 1597 edition of Part II is structured as follows: 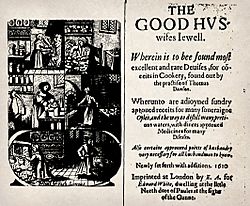 A borrowed frontispiece and the title page, 1610 edition

The book is illustrated only with a frontispiece. In the 1610 edition this has six kitchen scenes, including a three-legged pot over an open fire, cordials being distilled, a bread oven, and pots and roasts on a spit over a fire.

Dawson's recipes included medicines, some of which involved sympathetic magic. The Good Huswife's Jewell described "a tart to provoke courage in either man or woman", calling for the brains of male sparrows. Torn sinews are healed by taking "worms while they be nice", crushing them and laying them on to the sore "and it will knit the sinew that be broken in two".

A book called The Second Part of the good Hus-wiues Jewell was published by Edward White in 1597.

All content from Kiddle encyclopedia articles (including the article images and facts) can be freely used under Attribution-ShareAlike license, unless stated otherwise. Cite this article:
The Good Huswifes Jewell Facts for Kids. Kiddle Encyclopedia.