The Lyceum, Liverpool facts for kids

The Lyceum is a Neoclassical Grade II* listed building located on Bold Street, Liverpool, England. It was constructed in 1802 as a news-room and England's first subscription library (1758-1942) and later became a gentleman's club.

After the club relocated in 1952 the building was left unoccupied for many years, eventually falling into a state of disrepair. Calls were made for its demolition in the late 1970s, however a campaign against demolition was successful and it later reopened as a post office. Currently most of the building lies vacant with only part of the building serving as a branch of The Co-operative Bank.

In 1757 members of a small literary club met in the house of William Everard, a schoolmaster to discuss reviews, periodicals and later books which were allowed to circulate among members. A year later on 1 May 1758 The Liverpool Library was established and the books which were originally stored in a large chest in Everard's parlor were moved to a number of different premises around the city centre as the collection increased. A proposal was put forward on 12 May 1800 to club members for the construction of a purpose built library in order to house their overflowing collection which had outgrown its current home on Lord Street. 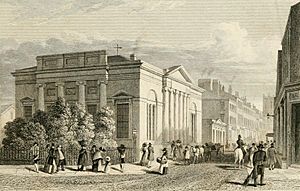 Lyceum Newsroom and Library in 1828

A design was accepted from architect Thomas Harrison of Chester which showed the building facing Church Street, this was later modified to fit local circumstances. Each of the library's 892 subscribers contributed 12 guineas (£12.60) each towards its construction. A 50-year lease on the land was purchased and construction work began in 1800 under the guide of William Slater. Completed two years later at a cost of £11,000 the deed was then signed. Signatories included John Lightbody, John Currie, Rev’d John Yates and most notably abolitionist William Roscoe. The Lyceum opened on the 17th December 1802 with both the newsroom and library acting as separate institutions offering shares priced at 12 guineas for the newsroom and 5 Guineas for the library. Selling of these shares raised £2089 10s. The newsroom contained a coffee room and reading room were members had access to provisional London and Irish newspapers, magazines, reviews and maps. Members were charged 10s 6d annually while proprietors paid 1 Guinea and could admit a stranger for two months. Adjacent the library was housed in a circular room which was estimated in 1807 to contain upwards of 10,000 volumes. Other rooms in the building were used for giving lectures and as meeting rooms for committee members.

Over time the newsroom expanded, eventually taking over most of the building to become known as the 'Lyceum Gentlemen's Club'. The library part of the building closed in 1942 and its collection of books was given to Liverpool Public Library. Ten years later, after a century and a half in the building, the club moved into new premises in the city center while the lyceum became Grade II listed building on 28 June 1952. Subsequently, the building was sold to developers who in 1971 submitted and application to Liverpool City Council for the building to be demolished in order make way for a shopping development and extension to Liverpool Central Train Station. A petition called 'Save the Lyceum' and the involvement of SAVE Britain's Heritage forced the government’s Department of the Environment to purchase the building from the developers. 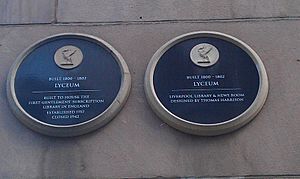 In 1984 the Lyceum was bought by the Post Office for £320,000 with a view of turning it into Liverpool's Post Office headquarters and a philatelic museum. However a major restructuring of the UK's Post Offices which formed private company Post Office Counters Ltd meant the plans could no longer go ahead due to limited resources. Post Office Counters Ltd sold the Lyceum back to the original developers who again requested consent for its demolition. With opposition from Liverpool City Council and English Heritage, a compromise with developers resulted in part of the restored building being leased back to the Post Office and other parts converted to retail outlets. The lower floor became a building society while the ground floor along with the post office became a changing succession of different bars/cafes under various names including 'Life Bar', 'Prohibition', 'The Bar and Grill' and the 'Lyceum Café'.

It was announced in March 2004 that the post office branch was to close following a downsizing of Post Offices. After its closure other outlets soon followed, leading to the whole building being empty except for a branch of The Co-operative Bank' located on the lower floor. Two years later, property developer Landlord Harbour View Estates bought the building for £7.8m only to put it up for sale again in 2008 for £4.25 million after the company went into administration. 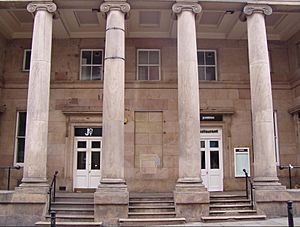 Thomas Harrison's original plan was for the building to face Church Street with a flight of steps leading up to the entrance but this plan was altered to meet 'local circumstances'. The exterior is neo-classical in style and built with ashlar stone topped with a slate pitched roof that is part mansard. Its plan consists of a rectangle with a recessed portico held up by six ionic columns which faces Bold street. its main entrance consists of 4 six-panel doors with architraves, cornices and consoles frames. On each side of the portico are three slightly recessed windows divided by Doric columns.

On the left side facing Church street are five evenly spaced half length windows with the first and fifth having pediments. The center three windows are divided by four ionic columns and topped with alto relievo images of Greek characters by F.A legé. The left relief is a seated geographer with a divider measuring distances on a globe, this is speculated to be Eratosthenes. In the middle is Apollo the god of art, music and poetry. And on the right is Hermes the god of commerce and communication. The lower third of the building has full length windows and two doors. Historically this part of the building had a semi-circular area with trees, this has since been flagged over and railings added. The overall exterior was restored in the 1980s removing soot which had built up on the stone.

All content from Kiddle encyclopedia articles (including the article images and facts) can be freely used under Attribution-ShareAlike license, unless stated otherwise. Cite this article:
The Lyceum, Liverpool Facts for Kids. Kiddle Encyclopedia.