The Problem Solverz facts for kids

Kids Encyclopedia Facts
For the episode of the television series 30 Rock, see The Problem Solvers.

The Problem Solverz is an American animated television series that aired on Cartoon Network. Created by Ben Jones, it follows Alfe, Roba, and Horace, a group of detectives in their troubled town, Farboro.

The aforementioned characters were designed while Jones attended college in the 1990s; he later founded the art collective Paper Rad with Jessica and Jacob Ciocci. The characters were featured in Jones' and the collective's animations and comics before the creator pitched a pilot to Adult Swim featuring the trio. The network's executives referred Jones to Cartoon Network, who commissioned a series featuring the same characters. The series was produced in Adobe Flash, with around fifteen animators employed at Cartoon Network Studios and the co-production of Mirari Films.

The Problem Solverz was first aired on April 4, 2011. The first season consisted of eighteen episodes, concluding on September 29, 2011. A second and final season was released exclusively on Netflix in 2013. 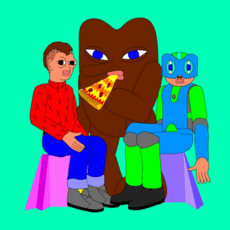 From left to right: Horace, Alfe, and Roba, the main characters of the series

The series follows the eponymous detectives Alfe (Ben Jones), Roba (also Jones), and Horace (Kyle Kaplan). The trio take up solving, and sometimes creating, the numerous problems that plague their town, Farboro. To their aid is Tux Dog (John DiMaggio), an extremely wealthy dog who helps the Solverz in some of their cases but is just as often the source of their problems.

Alfe (pronounced Alfé) is a large, fluffy, man–dog–anteater found and raised by Horace when both were young. He loves devouring large quantities of food, especially pizza and hamburgers, and acts impulsively during missions. Roba, Horace's twin brother and cyborg, is the smartest member of the group, but he suffers from insecurity and anxiety. Horace is the calm and collected leader of the team, usually applying common sense with his detective work and caring after Alfe.

The main Problem Solverz characters first appeared in an animated short entitled, "Alfe: Gone Cabin Carzy" [sic]. The short was created and produced by the art collective Paper Rad, and was written by Ben Jones. This short was included on their DVD Trash Talking, published by Load Records in 2006.

The second Paper Rad animated short, "Problem Solvers", was released on a stand-alone DVD in 2008 as a bonus for the seventh volume of The Ganzfeld, a periodical book series written by Dan Nadel. Although it does not include the main Problem Solverz characters, it introduces the problem solving concept which Jones would use as the basis of his homonymous Cartoon Network series.

The pilot episode "Neon Knome" was produced in 2008 by PFFFR and Williams Street for Adult Swim, and then released in 2010 on their official website as part of the "Big, Über, Network, Sampling" programming block.

Eight episodes were produced for Season 2 and were released through Netflix on March 30, 2013. This marks the only season of the show to never be aired on television.

All content from Kiddle encyclopedia articles (including the article images and facts) can be freely used under Attribution-ShareAlike license, unless stated otherwise. Cite this article:
The Problem Solverz Facts for Kids. Kiddle Encyclopedia.