The Rose (theatre) facts for kids 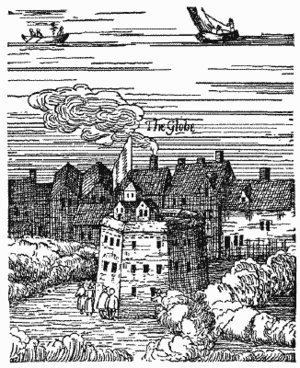 The Rose (mislabelled as "The Globe") in the Visscher panorama

The Rose was an Elizabethan theatre. It was the fourth of the public theatres to be built, after The Theatre (1576), the Curtain (1577), and the theatre at Newington Butts (c. 1580?) – and the first of several playhouses to be situated in Bankside, Southwark, in a liberty outside the jurisdiction of the City of London's civic authorities. Its remains were excavated by archaeologists in 1989. 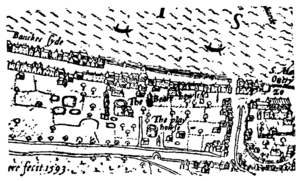 1593 map showing The Rose in relation to the Bear Garden on Bankside. Enlarge 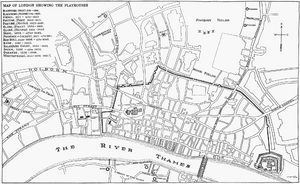 The Rose is labelled in the bottom centre this London street map. Enlarge

The Rose was built in 1587 by Philip Henslowe and by a grocer named John Cholmley. It was the first purpose-built playhouse to ever stage a production of any of Shakespeare's plays. The theatre was built on a messuage called the "Little Rose," which Henslowe had leased from the parish of St. Saviour, Southwark in 1585. The Rose was the first of several theatres to be situated in Bankside, Southwark near the south shore of the River Thames. It was located in the Liberty of the Clink, a liberty outside the jurisdiction of the City of London's civic authorities. The Rose contained substantial rose gardens and two buildings; Cholmley used one as a storehouse, and Henslowe. North of London, professional playhouses like the Curtain Theatre and The Theatre had already been open for over a decade. However, Henslowe recognized the ease at which audiences could ferry across the River of Thames and established a playhouse in this particular location.

The theatre was built by the carpenter John Griggs. The new building was of timber, with a lath and plaster exterior and thatch roof. In shape it was a fourteen-sided polygon, of about 72 feet (22 m) in external diameter. The inner space was also a fourteen-sided polygon, about 47 feet (14 m) wide. Modern calculations show that the dimensions and fourteen-sided layout were dictated by the use of the standard 16th-century measure of one rod as a base and the carpenter's "rule of thumb" method of dividing a circle into seven equal parts, subdivided.

Henslowe's documentation of the Rose Theatre has survived, and was placed in the library of Dulwich College by its founder, Edward Alleyn, in 1619. Alleyn was the principal actor of the Lord Admiral's Men. City records indicate that The Rose was in use by late 1587; however, it is not mentioned in Henslowe's accounts between its construction and 1592, and it is possible that he leased it to an acting company with which he was not otherwise concerned. In May 1591, The Lord Admiral's Men split off from the Lord Chamberlain's Men, a company of London's most famous actor, Richard Burbage, at The Theatre. Their repertoire included plays by Robert Greene and especially Christopher Marlowe, who became the theatre's main playwright. Edward Alleyn married Henslowe's step-daughter in 1592, and the two became partners. However, The 1592–4 period was difficult for the acting companies of London; a severe outbreak of bubonic plague meant that the London theatres were closed almost continuously from June 1592 to May 1594. The plague took nearly 11,000 Londoners. The companies were forced to tour to survive, and some, like Pembroke's Men, fell on hard times. From 1592 to 1593, the Lord Strange's Men performed on the Rose Stage. From 1593 to 1594, the Sussex's Men performed in its place, suggesting that the Lord Strange's Men were among the deceased. By the summer of 1594 the plague had abated, and the companies re-organized themselves. The Queen's Men performed in 1594 and the Lord Admiral's Men, still led by Alleyn, resumed its place at the Rose by Spring time. At their height, in the year from June 1595, they performed three-hundred times, nearly thirty-six plays, twenty of which were new. The Lord Admiral's Men resided at The Rose for seven years.

Henslowe enlarged the theatre for The Lord Admiral's Men, moving the stage further back (six feet six inches, or two metres) to make room for perhaps 500 extra spectators. The original Rose was smaller than other theatres, only about two-thirds the size of the original Theatre built eleven years earlier, and its stage was also unusually small; the enlargement addressed both matters. Henslowe paid all the costs himself, indicating that Cholmley was no longer involved – either deceased or bought out. The renovation gave the theatre, formerly a regular polygon (with 14 sides), a distorted egg shape, a "bulging tulip" or "distorted ovoid" floor plan.

However, the Rose's success encouraged other theatre companies to set up roots in the Bankside. The Swan Playhouse opened nearby in the Winter of 1596. People were drawn to the comedies and tragedies performed at the Swan in contrast to the History Plays the Rose Theatre was renowned for. In 1598, Alleyn retired, and Henslowe shifted his position over from landlord and banker to the full financial manager. When the Lord Chamberlain's Men built the Globe Theatre on the Bankside in 1599, however, the Rose was put into a difficult position. In January the following year, Henslowe and Alleyn built The Fortune Theatre north of the River of Thames. Prompted by complaints from city officials, the Privy Council decreed in June 1600 that only two theatres would be allowed for stage plays: The Globe Theatre in Bankside, and the Fortune Theatre in Middlesex – specifically, Shoreditch. Henslowe and Alleyn had already built the Fortune, apparently to fill the vacuum created when the Chamberlain's Men left Shoreditch. The Rose was used briefly by The Lord Pembroke's Men in 1600 and the Worcester's Men in 1602 and 1603. The lease ended in 1605, and Henslowe was ready to renew his lease under the original terms. However, the parish insisted on renegotiating the contract and tripled the price of his rent. Henslowe gave up the playhouse in 1605. The Rose may have been torn down as early as 1606. Henslowe moved on to build the Hope Theatre in 1613. He died three years later.

The Rose appears to have differed from other theatres of the era in its ability to stage large scenes on two levels. It is thought that all Elizabethan theatres had a limited capability to stage scenes "aloft," on an upper level at the back of the stage – as with Juliet at her window in Romeo and Juliet, II.ii. A minority of Elizabethan plays, however, call for larger assemblies of actors on the higher second level – as with the Roman Senators looking down upon Titus in the opening scene of Titus Andronicus. An unusual concentration of plays with the latter sort of staging requirement can be associated with the Rose, indicating that the Rose had an enhanced capacity for this particularity of stagecraft. 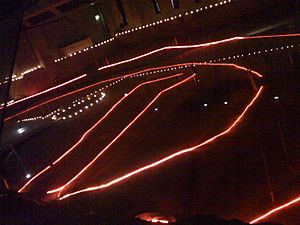 An archaeological dig was begun in 'Park Street', during planned large scale redevelopment. Investigatory trenches revealed several finds, which came to the attention of Sam Wanamaker, who was seeking the means to recreate Shakespeare's Globe Theatre, and conveying updates to his contacts in theatrical productions early in 1988. An action committee was formed to 'Save The Rose Theatre', being assisted by both 'Entertainment Stars and a rotation of public volunteers, to ensure the site's protection, which was continually threatened by construction crews ignorant of the potential 'English Heritage' beneath.

In March 1989, the remains of The Rose were again threatened with destruction resulting in a physical stand-off between the two parties at the entrance of the building development. A campaign to save the site was launched by several well-known theatrical figures, including Dame Peggy Ashcroft and Lord Olivier. Prior to the site being given full legal protections, a fundraising street party attended by some famous people from the fields of entertainment, was held on 23 April 1989.

It was eventually decided to suspend the proposed building over the top of the theatre's remains, leaving them conserved beneath, resulting in what has been called "one of the weirdest sights in London". A blue plaque at 56 Park Street marks the spot.

When the Department of Greater London Archaeology (now MOLA) carried out the excavation work, the staff found many objects which are now stored in the museum itself. Portions of the theatre's foundations, under the ingressi (wooden stairs leading to the galleries), were littered with fruit seeds and hazelnut shells; it has been claimed that hazelnuts were the popcorn of English Renaissance drama. When combined with cinder and earth, they provided a tough floor surface "so tough, indeed, that 400 years later archaeologists had to take a pickaxe to it to penetrate it". Initially the floor of the yard (including the area beneath the raised wooden stage) had a screeded mortar surface but when the building was extended a compacted layer of silt, ash and clinker, mixed with hazelnut shells, was used. The nutshells were brought to the site from a nearby soap works, where the nuts were crushed for their oil, rather than evidence of litter left by the audience. 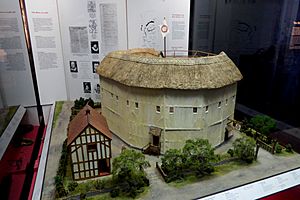 Model of The Rose in the Museum of London.

In 1999, the site was re-opened to the public, underneath the new development. Work continues to excavate this historic site further and to secure its future. The foundations of the Rose are covered in a few inches of water to keep the ground from developing major cracks. In 2003 the Rose was opened as a performance space with a production of Marlowe's Tamburlaine the Great.

A replica of The Rose Theatre was featured in the film Shakespeare in Love and after 10 years in storage was donated by Dame Judi Dench to the British Shakespeare Company, who were planning to rebuild it in the north of England, although the plans have not progressed any further since they were announced in 2009. In 2008 the Rose Theatre, Kingston, opened. It is a modern theatre, but based on the plan of the original Rose, revealed by archaeology in 1989.

All content from Kiddle encyclopedia articles (including the article images and facts) can be freely used under Attribution-ShareAlike license, unless stated otherwise. Cite this article:
The Rose (theatre) Facts for Kids. Kiddle Encyclopedia.