The Six Swans facts for kids

The Six Swans (German: Die sechs Schwäne) is a German fairy tale collected by the Brothers Grimm in Grimm's Fairy Tales in 1812 (KHM 49).

It is of Aarne–Thompson type 451 ("The Brothers Who Were Turned into Birds"), commonly found throughout Europe. Other tales of this type include The Magic Swan Geese, The Seven Ravens, The Twelve Wild Ducks, Udea and her Seven Brothers, The Wild Swans, and The Twelve Brothers. Andrew Lang included a variant of the tale in The Yellow Fairy Book.

The tale was published by the Brothers Grimm in the first edition of Kinder- und Hausmärchen in 1812, and substantially rewritten for the second edition in 1819. Their source is Wilhelm Grimm's friend and future wife Henriette Dorothea (Dortchen) Wild (1795–1867). 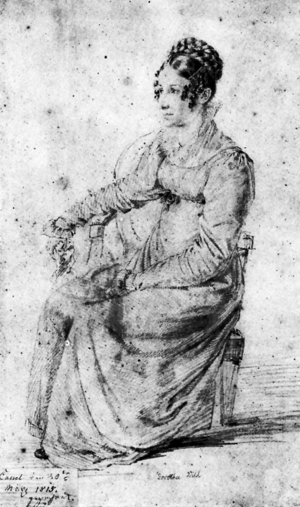 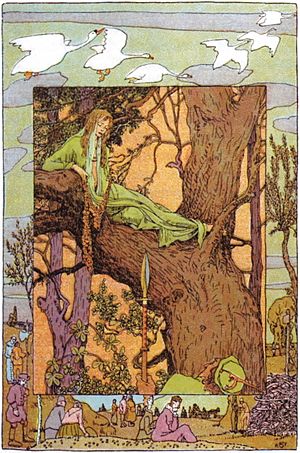 A King gets lost in a forest, and an old woman helps him, on the condition that he marry her beautiful daughter. The King has a bad feeling about this but accepts anyway. He has six sons and a daughter from his first marriage, however, and fears that the children will be targeted by his new wife; so he sends them away and visits them in secret.

The new queen and now stepmother, who has learned witchcraft from her mother, finds out about her six stepsons and decides to get them out of her way. She sews six magical shirts and goes to the hidden castle where the children are hidden for safety, then tosses the shirts over the boys and transforms them into swans.

The brothers can only take their human forms for fifteen minutes every evening. They tell their still human younger sister that they have heard of a way to break such curses: she must make six shirts out of nettles and can't make a sound for six years or the spell will never be broken and she will transform into swan forever. The girl agrees to do this and runs away, hiding in a hunter's hut and dedicating herself solely to gathering the nettles and sewing in silence.

Years later, the King of another country finds the girl doing this, is taken by her beauty, and takes her into the court with the intention of making her his queen. However, the King's snobbish mother hates her and does not consider her fit to be a Queen. When she gives birth to their first child, the wicked mother-in-law takes away the child and accuses the queen of killing and eating him, but the King refuses to believe it.

The young Queen gives birth to two other children, but twice again the mother-in-law hides them away and falsely claims that she has killed and eaten her babies. The King is unable to keep protecting her, and unable to properly defend herself, the queen is sentenced to be burned at the stake as a witch. All this time, she has held back her tears and her words, sewing and sewing the nettle shirts no matter what.

On the day of her execution, the Queen has finished making all the shirts for her brothers. When she is brought to the stake she takes the shirts with her and when she is about to be burned, the six years expire and the six swans come flying through the air. She throws the shirts over her brothers and they regain their human form, although in some versions, the youngest brother cannot reverse the transformation completely and his left arm remains a wing due to the missing sleeve in the last shirt sewn by his sister.

The queen is now free to speak, and she can defend herself against the accusations. She does so with the support of her brothers. In the end, the evil mother-in-law is the one who is burned at the stake as punishment.

A literary predecessor to the tale is The Seven Doves (Neapolitan: Li sette palommelle; Italian: I sette colombi), in Giambattista Basile's Pentamerone, where the brothers are transformed into doves.

In the tale from the Brothers Grimm, there are six brothers and they are transformed into swans.

In other European variants, the number of princes/brothers alternates between three, seven or twelve, but very rarely there are two, eight, nine, ten or even eleven, such as the Danish fairy tale collected by Mathias Winther, De elleve Svaner (English: "The Eleven Swans"), first published in 1823, or Ligurian tale Les onze cygnes.

Commenting on the Irish variant collected by Patrick Kennedy, Louis Brueyre indicated as another variant the Indian tale of Truth's Triumph, or Der Sieg der Wahrheit: in the second part of the tale, the youngest child, a girl, witnesses the transformation of her one hundred brothers into crows.

In a Lithuanian variant, The Twelve Brothers, Twelve Black Ravens, the witch stepmother asks for her husband to kill his sons, burn their bodies and deliver her the ashes.

In the Hungarian variant A tizenkét koronás hattyu és a csiháninget fonó testvérkéjük, the boys' poor mother curses her twelve sons into the avian form, while also giving an escape clause: after their sister is born, she should sew twelve shirts to save them.

The other variation is in the result of the avian transformation: in some versions they are ducks, in others ravens, and even eagles, geese, peacocks, blackbirds, storks, cranes or jackdaws.

The eagle transformation is attested in the Polish tale Von der zwölf Prinzen, die in Adler verwandelt wurden (English: "The Twelve Princes who became Eagles"), translated as The Eagles.

The geese transformation is present in the Irish variant The Twelve Wild Geese, collected by Irish folklorist Patrick Kennedy and compared to the German variants ("The Twelve Brothers" and "The Seven Ravens") and the Norse one ("The Twelve Wild Ducks").

In a tale attributed to Northern European origin, The Twelve White Peacocks, the twelve princelings are transformed into peacocks due to a curse cast by a troll.

The blackbird transformation is attested in a Central European tale (The Blackbird), collected by Theodor Vernaleken: the twelve brothers kill a blackbird and bury it in the garden, and from its grave springs an apple-tree bearing the fruit the causes the transformation.

The avian transformation of storks is present in a Polish tale collected in Krakow by Oskar Kolberg, O siedmiu braciach bocianach ("The Seven Stork Brothers").

The Hungarian tale A hét daru ("The Seven Cranes") attests the transformation of the brothers into cranes.

The jackdaw transformation is attested in the Hungarian tale, A csóka lányok ("The Jackdaw Girls"), wherein a poor mother wishes her rambunctious twelve daughters would turn into jackdaws and fly away, which was promptly fulfilled; and in the "West Prussian" tale Die sieben Dohlen ("The Seven Jackdaws"), collected by professor Alfred Cammann (de).

Folklorists Johannes Bolte and Jiri Polivka, in their commentaries to the Grimm fairy tales, compiled several variants where the brothers are transformed into all sorts of beasts and terrestrial animals, such as deer, wolves, and sheep.

All content from Kiddle encyclopedia articles (including the article images and facts) can be freely used under Attribution-ShareAlike license, unless stated otherwise. Cite this article:
The Six Swans Facts for Kids. Kiddle Encyclopedia.